LEGO Dimensions Makes You Feel Like a Kid Again

If there's one thing kids don't care about when they're in the midst of play, it's intellectual property rights. In play, characters and worlds mash together seamlessly, fuelled purely by a child's imagination and unfettered by such mundane things as trademark (no, son, you can't say the Batmobile is powered by a captured Pikachu. Just because).

Which is why LEGO Dimensions (Warner Bros. Interactive's and TT Games' take on the huge toys-to-life genre populated by the likes of Skylanders and Disney Infinity) and its mash-up of some wildly popular properties feels so, well, amazing. Ever wanted to try and hit 88 miles per hour in Back to the Future's DeLorean along the yellow brick road? Or see how Batman deals with those pesky kids from Scooby Doo? LEGO Dimensions is promising to let you do just that and more with a whole raft of different worlds, and it could come very close to nailing that elusive and pure feeling of play that we all engaged in as kids.

LEGO Dimensions promises no restrictions on which levels you can use its many different characters and vehicles with. Of course, other similar games already let you mix and match characters from different IPs together: Disney Infinity allows play with any character in its sandbox mode, but cross-IP play in its playsets are a no-no (so no Marvel characters in The Pirates of the Caribbean playset, for example).

But LEGO Dimensions seems to revel in the freedom to allow players to mix to their heart's content. Previous trailers for LEGO Dimensions already showcased the fictional worlds of The Lord of the Rings, DC Comics, Back to the Future, and the recent LEGO Movie being mashed together, but a whole raft of other properties were officially confirmed today. These new ones include The Simpsons, Portal, Scooby Doo, Ghostbusters, Midway games, Doctor Who, Jurassic World, and The Wizard of Oz (for the much younger set, current LEGO favorites Ninjago and Chima were also confirmed).

I recently played two brief levels from LEGO Dimensions, and in tone, it's remarkably similar to last year's The LEGO Movie, which cheerfully threw together a vast array of characters from different licenses into one joyful melange. In the Dimensions world of The Wizard of Oz, for example, Batman ran across Dorothy and the gang, leading Batman to assume the entire bright, shiny world of Oz was actually a hallucination created by Scarecrow. The gameplay was typical of the LEGO games so far--controls were simple, and each character had moves unique to them, forcing you to switch around depending on the task at hand. In an attack by the Wicked Witch of the East a little further down the yellow brick road, for example, I had to switch to Gandalf in order to use his long-range spells to hit the broomstick-riding Witch.

Given the fun and irreverent nature of what I saw with LEGO Dimensions, it's little surprise to find, then, that one of the producers for The LEGO Movie was developer TT Games' founder and creative director Jon Burton. Burton says the success of the movie was critical in showing different license holders that a mix of worlds with the LEGO universe would work.

"We’ve been making games based on licenses since 1993, and have made two Sonic games, two Crash Bandicoot games, Toy Story 1 & 2, as well as all of our LEGO games, so license holders can see how carefully we treat license. Most of our LEGO games are popularly seen as love-letters to the IP they are based on, which I think gave license holders some comfort. We understand and love each license we work on, and it shows in the games. The biggest hurdle was getting different license holders to agree to have a mix of licenses in the one game. The LEGO Movie introduced cameos of different licenses into a consistent LEGO world, which certainly paved the way and opened a few doors," Burton said.

It's not just within the game that LEGO Dimensions is trying to instil a greater sense of play. The actual figures you'll use in Dimensions are honest-to-goodness LEGO figures, in that you'll have to put them together yourself and attach to its specific disc (which holds the figure-specific information for the game to recognise). Even the game's "portal" is a LEGO set you'll need to build. In the game's starter pack alone (which includes the toypad, Batman, Gandalf, Wyldstyle, and the Batmobile), there are more than 100 LEGO pieces.

Breaking apart and creating new objects with the LEGO you have is even built into the game itself. The Batmobile, for example, has three different "forms" it can take, and Dimensions includes in-game instructions (in the form of replica LEGO instruction pamphlets) to help you rebuild.

Unfortunately, the game won't let you build just anything and have it appear in game, but having a very tactile, building element to deal with lends LEGO Dimensions an appeal its competitors don't have. It's another way Dimension seemingly wants to tap into that sense of being a child again, to recreate the days when we all would play with LEGO and create insane narratives in our minds using our favorite characters.

For TT Games' Burton, that aspect of emulating how children play was the key feeling he wanted LEGO Dimensions to bring to its players. "The LEGO Movie introduced cameos of different licenses into a consistent LEGO world, which certainly paved the way and opened a few doors. We explained (to license holders) how we were digitally recreating the way kids play with LEGO sets, and if they owned a Lord of the Rings set and a Batman set no one could stop them combining the two in the real world, so why stop them in the digital world," Burton said. 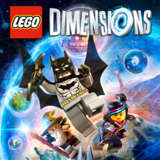