Legends Of Runeterra Has Officially Launched On PC And Mobile

The beta days are over.

Riot’s strategy card game, Legends of Runeterra, has officially launched after three months in open beta. From April 28 to April 30, the game is being launched around the world on both PC and Mobile, with regions releasing the game at different points over the course of the two days.

The full release comes with an all-new card set called Rising Tides, and a range of new champions and cards from League of Legends have been introduced. The update also adds 11 champions, six keywords, a new cosmetic board, two cosmetic guardians, new card backs, over 120 new cards, and a series of new emotes.

Regions have been updated as well, with the pirate-themed region Bilgewater officially becoming its own region and the region roads for existing regions have been expanded on.

Log-in bonuses have been added, incentivizing players to log on each day and complete daily missions for free cards. Players will be rewarded for the first seven days they log in, with rewards ranging from cards to Expedition tokens. The final reward is a new deck with two Ashe champion cards.

Beta players don’t need to worry, as the update does not wipe out any progress made so far. All purchases and progress made before the full release has been carried over.

Both the mobile and PC editions can be linked to a single account, with cross-platform play available from launch. Any Android device with an OS 5.0, 2 GB RAM, and a GPU Adreno 306 equivalent or better will be able to run the game. iPhones with at least iOS9 and an Arm64 processor should be able to run this game, although Riot does not recommend 1GB RAM devices such as the iPhone 5s, iPhone 6, and iPad Air 1.

According to the official website, Legends of Runeterra will not be launching in China or Vietnam at this time.

For new players jumping into the game, check out our analysis on how Legends of Runeterra works and just how it differs from all the other strategy card games available. 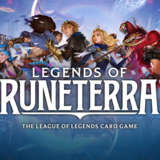