Legend Of Mana Gets Major Makeover For Nintendo Switch This June

Legend of Mana features retooled visuals and new musical arrangements, along with other quality-of-life enhancements.

A completely overhauled version of Legend of Mana is coming to Nintendo Switch, and it's far more than a simple remaster. Arriving June 24, the new Legend of Mana looks like the ideal blend of old and new.

Announced during today's Nintendo Direct event and releasing on June 24 for Nintendo Switch, Legend of Mana features new HD graphics, but it doesn't go for a completely modern look like we saw with the Secret of Mana remake. Music has been rearranged for the new version, but you can choose to switch between the new and old arrangements on the fly to fit your preference.

Legend of Mana sees your map initially barren, and it's up to you to place down artifacts to bring towns to life using the Land Creation System, and you will choose how to advance the story.

In the new version, you can choose to turn off combat encounters for a more casual experience, and there is also a new mini-game called Ring Ring Land that uses a retro-style pixel-art device.

Legend of Mana originally released after Secret of Mana and Trials of Mana. The original version of Secret of Mana was released on the Super Nintendo, while Legend of Mana first came to the PlayStation in 1999. The new version is also coming to PS4 and Steam on the same day as Nintendo Switch. On PS4, those who preorder will get 10 avatars and a custom theme. Those on Steam will get a special PC wallpaper. 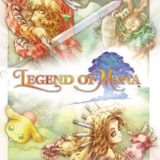