The third game in Legacy's Law & Order series centers on the murder of a young tennis star ahead of the US Open.

Legacy Interactive announced the development of Law & Order: Justice Is Served back in April, but details of its storyline and improvements over previous games in the series have been kept under wraps until now. Assuming the role of a detective working alongside the TV show characters Briscoe and Green, you'll be investigating the possible murder of an 18-year-old tennis star the day before the US Open.

Elena Kusarova's body is discovered on a locker room floor ahead of the tournament, and the autopsy reveals that her body is loaded with one of the almost-undetectable performance-enhancing drugs. It's conceivable, of course, that she died as the result of an accidental overdose or has committed suicide, but it's up to you to determine whether either of those versions of events holds water or whether she was in fact murdered. Given the high profile of the deceased there are certainly plenty of potential suspects, including advisors, rivals, overzealous fans, and even her parents.

As in previous Law & Order games, you'll need to build a strong case before making any arrests, and you'll spend much of your time searching the crime scene, analyzing evidence, solving puzzles, and interrogating suspects. You'll also have the option to interact with characters other than suspects in more ways than in previous games; for example, you might decide to conduct an interview with the medical examiner responsible for the autopsy. The fact that your in-game phone can now be used to dial out as well as to receive messages means that, should you feel it necessary, you can conduct interviews with people over the phone.

The interviews themselves will be more flexible than in previous Law & Order games, so in addition to asking multiple-choice questions, you'll have the option to ask witnesses and suspects about any other piece of evidence or any other character you wish. Law & Order: Justice Is Served will feature around 40 speaking characters in total, compared to just 30 in Law & Order II. Legacy Interactive has also stated that the characters in the game will be composed of approximately 40,000 polygons compared to 12,000 in the previous game, making the stars of the show even easier to recognize.

Law & Order: Justice Is Served is currently scheduled for release toward the end of this year. 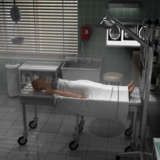