The recent surge of controversy surrounding the games industry isn't showing signs of abating just yet. Following the Church of England's Resistance row and the news that Manhunt 2 has been banned in the UK, a new storm has hit today.

This one focuses on the use of an image in Law & Order: Double or Nothing of two-year-old James Bulger, which was captured on CCTV footage as he was led away by two 10-year-old boys in a Liverpool shopping centre in 1993, reports Sky News. Bulger was later murdered by the boys and his body left on a railway line.

Bulger's mother, Denise Fergus, has said that the use the image in a game was "below contempt." Fergus commented, "Using that terrible picture of James as part of a game is sick. To know that he has been turned into a clue in a game makes me very angry."

Law & Order: Double or Nothing, developed by Legacy Interactive, was released in 2003. The game is the second video game adventure title based on the hit US TV show Law & Order.

In the game, players partner with a virtual character from the TV show, Detective Lennie Briscoe, in solving what at first appears to be a random murder of a respected scientist on a busy New York street.

The image of the tragic tot holding hands with one of the boys who murdered him shortly thereafter shocked the public when it appeared in news reports at the time. The game shows the image pinned to a notice board, and it is referred to as players are asked to solve a kidnapping.

The UK distributors of the game, GSP, said that the title had been withdrawn from sale forthwith due to the offending image until it has "investigated this matter further." As of press time, representatives with Legacy and US publisher Vivendi Games had not returned requests for comment. 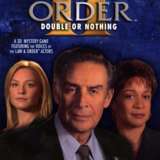