Cattle Call's Arc the Lad: End of Darkness will hit the PlayStation 2 this June.

The newest game in the Arc the Lad series has completed beta testing and is on its way to the factory for duplication and distribution, according to publisher Namco Hometek. The game was developed by Cattle Call, which worked on Arc the Lad: Twilight of the Spirits. The newest installment will reach American retailers sometime in June and is rated T for teen.

End of Darkness is a departure from the norm for the Arc the Lad series. Rather than remaining a turn-based role-playing game like the previous four chapters, this newest edition favors a real-time battle system that emphasizes action and fast-paced combat.

Players will once again take on the role of Edda, a young warrior who will make his way through islands and continents littered with evil monsters and dastardly characters.

This time around, players will be able to take the fight online and compete or cooperate in the game's numerous online gameplay modes. The game supports up to eight players online.

Fans of the series should be happy to know that 24 characters from previous installments of the game will be playable in this edition, provided they can be found and unlocked by the player. 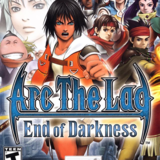 Arc the Lad: End of Darkness
Follow
$19.99 on Walmart
Buy