Snag Sundered for free until January 16.

Epic announced yesterday that it will continue its weekly free games program through 2020. That's awesome news for PC gamers, as the free offerings are often some of the best indie games around. Case in point: Sundered, a chaotic, hand-drawn Metroidvania that's currently free over at Epic. Sundered: Eldritch Edition is only available until tomorrow, January 16 at 2 PM PT / 11 AM ET. Don't worry, a new free game will take its place. Horace, a cute and wildly varied platformer, will be free from January 16 to January 23.

From the developers of Jotun, Sundered released in 2017 and follows a woman named Eshe who finds an ancient monument and gets sucked into an otherworldly cavern. In the underworld, Eshe encounters a malevolent entity known as the Shining Trapezohedron, which becomes her guide, and learns the world is now overrun with monsters and machines. The terrifying hordes of enemies and ever-changing world are heavily inspired by the works of H.P. Lovecraft.

As Eshe fights her way through the world and attempts to escape, Eshe encounters corrupted Elder Shards, which can grant her the ability to use ancient eldritch powers. The game has multiple endings based on what you decide to do with those relics--embrace their chaotic power or destroy them for good.

Sundered also includes the Magnate of the Gong update, which added local co-op multiplayer support for up to four players. Eldritch Edition also includes new areas and a new boss battle. The game earned a solid 8/10 in GameSpot's Sundered review for its fast-paced combat, well-paced progression, and overall creation of tension and unease.

"Sundered is an enjoyable journey that iterates upon the Metroidvania style in ways that are both satisfying and substantial," wrote Matt Espineli. "Its progression systems are constantly fulfilling and combat is complex and exhilarating. While rare moments of unfair circumstances hold it back, Sundered remains a compelling and rewarding experience that you’ll be eager to play again, if only to seek out its other endings or simply to wipe out another swarm of grotesque creatures." 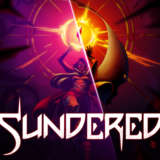