DuckTales Remastered will be delisted from digital storefronts soon.

The old adage "good things don't last forever" could not be more accurate, as Capcom has announced that DuckTales Remastered will leave digital storefronts this weekend. The classic platformer is scheduled to be delisted starting today, August 8.

DuckTales: Remastered is leaving digital storefronts in a duck-blur starting August 8th.
Life is like a hurricane, so get it on sale now or re-download it if you’ve previously purchased it. More details:
? https://t.co/J51wy3NiY4 pic.twitter.com/HXiDtSsUx6

In a blog post on Capcom's official website, the publisher explains DuckTales Remastered will be "75% off on most platforms" before getting removed digitally. It will remain purchasable until August 8 at 5 PM PT (for Xbox 360 and Xbox One via backwards compatibility), August 9 at 8 AM PT (for PS3), and August 9 at 4:59 PM PT (for Wii U). PC doesn't have a specified date, but DuckTales Remastered will be delisted at 4:59 PM PT on the platform.

Capcom notes that those who bought DuckTales Remastered digitally can redownload it even after its removal (unlike Konami's P.T., which was totally removed from the PlayStation Store back in May 2015). Further, those who own physical versions can install and play as normal. DuckTales Remastered can be purchased physically for $10 USD (on the Wii U) or $15 USD (on the other platforms) at GameStop.

In our DuckTales Remastered review, we said, "WayForward Technologies focused on the wrong elements in their attempt to bring DuckTales to the modern era. Getting the cartoon voice actors to reprise their roles is kind of neat, but now there are way too many tedious story segments. Meanwhile, the action has been made worse because of the less responsive controls, and there haven't been any elements added to make the simple combat and jumping more interesting. DuckTales Remastered will make you doubt happy memories from your childhood, or leave you baffled as to why people were nostalgic for such dull platforming in the first place." 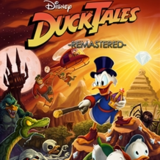