June is almost over, but there's still time to claim a few freebies before July's lineup of Games with Gold free games goes live on July 1. Three games are still available to claim: two Xbox One titles and one Xbox 360 game (which is backward-compatible, as usual).

For starters, you can grab Shantae and the Pirate's Curse for Xbox One until tomorrow, July 1. This Metroidvania from WayForward originally released in 2014 and stars a half-genie who wards off the invasion of her homeland by running, jumping, and whacking enemies with both her hair and items acquired along the way.

Now Playing: Free Xbox One And Xbox 360 Games With Gold For June 2020 Revealed

You can also snag Sine Mora before July 1. The Xbox 360-era shoot 'em up relies on time rather than a health bar, so you have to move fast without being reckless. The more enemies you kill, the more time you'll have, but once you start taking damage, the clock drops faster.

Xbox Live subscribers can also grab Coffee Talk, a visual novel that places you in the role of a barista who serves warm drinks and talks through problems with customers. They aren't your everyday customers though, as Coffee Talk is set in an alternate reality Seattle inhabited by werewolves, vampires, and other magical creatures. Coffee Talk will be free until July 15.

Xbox Games with Gold for June 2020 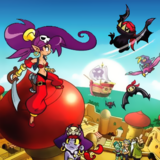