Learn the ins and outs of godhood in a quirky Japanese title for the GameCube.

There's something to be said about marching to the beat of your own drummer. When Japanese developer Param first tried its hand at a pseudo god-sim, the results were mixed. Doshin, released for the ill-fated 64DD add on for the Nintendo 64 in 1999 was seriously hampered by the limitations of the hardware it was crammed on. Not content to give up on the intriguing concept, developer Param chose to give the game another go on the far more muscular GameCube. The quirky title marries a deceptively simple premise with engaging gameplay and well-done graphics. The end result is a surprisingly addictive game that offers a solid console approach to a sim-style premise.

Doshin's story stays true to the 64DD game's premise and follows a mysterious yellow giant, whose free and easy attitude towards nudity is but one of his many charms. Wearing nothing a benevolent smile and an unkempt tuft of hair on his head, the big guy pops up out of the ocean one fine day and happens upon an island chain. After a brief bit of exploration, he comes across some of the locals and, before you can say "save me, o mighty one" winds up hanging out and helping the needy little guys. Given his immense size, proportionate strength, and other special abilities, Doshin is clearly just what the doctor ordered for a pack of natives just starting out in the world.

While moving about performing god-like acts does get complicated, Doshin's control scheme is easy to pick up and features a pleasing twist. You'll move the big guy with the analog stick, use the A button to pick up items, and B to jump. The Z button will toggle an onscreen map of the islands on and off. X and Y will let Doshin warp patches of land. The X button will raise patches of earth while the Y button will cause the land to sink. The d-pad will let you adjust the camera distance, while the yellow c-stick lets you adjust camera distance. The right trigger lets you take snapshots of your exploits that will be saved to your memory card and be reviewed in a gallery in the game. However, of all the things you'll be able to do as Doshin, it's easy to imagine that most gamers will enjoy the left trigger's function, which transforms the benevolent Doshin into a far more "fire and brimstone" incarnation called "Jashin." Doshin's mellow yellow form gives way to a deep red form that features an angry scowl on his face, gargoyle like wings and gives the world a much darker feel--the sky turns a dark red when you turn into Jashin. The change into Jashin offers more than just cosmetic changes to the game; when it occurs, all of your abilities are far more focused on destruction. A single press of the A button results in a heavy slap that sinks the ground while holding the button down yields a fearsome volley of fireballs that level anything in their path. Jumping with the B button will send Jashin high into the air courtesy of his wings and result in a ground-rattling stomp upon landing. Jashin's ability to raise or lower the earth is far more powerful than Doshin's and affects a much wider area as well. You'll find that as you go through the game the ability to switch between Doshin's two forms is something that will have to be managed carefully if you hope to be a successful deity.

Gameplay in Doshin shares the same deceptively simple but engaging approach as its control scheme. The game will be broken up into "days" starting you out every morning and sending you off ever night. You'll start off being coached by a narrator who keys you in on key control and game elements you'll need to keep track of in your day to day operations as local deity. You'll find that the locals are a simple people who are quite vocal about their needs. A combination of cries similar to those of the Mogwai seen in the movie Gremlins and small thought bubbles that appear over their heads will communicate their latest demands on you. Maintaining natives will range from moving trees around, to a bit of terraforming as you adjust height of the ground to their liking. In addition, you can choose to create land bridges between the various islands in the chain to allow for some socialization between the various tribes. As you satisfy everyone's needs, you'll be rewarded with hearts that will be tracked by an outline around the screen. If you collect enough Doshin will grow bigger and become more powerful. The flipside to the positive vibe associated with the hearts, are skulls that will also collect on the screen. You'll usually get stuck with a skull if you accidentally kill someone. You'll be rewarded with bounty of skulls if you transform into Jashin in front of the tribe. Collecting a screen full of skulls yields growth in Jashin as well.

If you manage to be an effective deity and keep everyone contented the villages under your care, you will grow and flourish and the people's feelings toward you will grow. You'll earn hearts just by coming by the village and gracing the natives with your presence when you're at your peak of popularity. You'll also notice that villages will become more advanced and grow in population if you do your job well. Monuments will even be erected in your honor. Unfortunately tending to your charges becomes more challenging as the game progresses, and you'll have to deal with natural disasters such as storms and tornados that can cause some pretty major hits on the local population.

Graphically Doshin is obviously a massive improvement over its clunky Nintendo 64 predecessor. Everything in the game is modeled well enough, albeit a bit too conservatively in terms of poly count. Texture detail is clean and simple on everything from rocks to foliage, and transitions smoothly as the lay of the land changes. For example, the ground will become barren if you move trees around or become lush and verdant if you group them together. Unfortunately the game's charm lies in its little touches rather than bowling you over with incredibly detailed high poly graphics. The water offers detailed reflections of Doshin in it as you walk in or near it. The villager animations offer a nice variety, as do those of Doshin and Jashin.

In our time with Doshin, we found it to be an engaging game that seemed to have a lot of potential. The game's heavy use of Japanese doesn't make the game very import friendly, but in spite of the language barrier we enjoyed ourselves. Hopefully Nintendo will decide to bring the game over, as the company has mentioned. 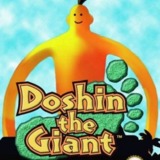