Animation studio behind The Simpsons in deal with Krome Studios; Ty the Tasmanian Tiger to be prepped for TV.

Today, the atypical partnership of Krome Studios and animation studio DPS Film Roman was announced. The two companies will collaborate to bring Ty the Tasmanian Tiger, Krome’s original IP from the 2002 platformer of the same name, to television and DVD in an animated format. DPS Film Roman is known for its work on the hit TV shows The Simpsons and King of the Hill. Krome Studios is also currently working on two multiplatform titles for later this year: King Arthur and Ty the Tasmanian Tiger 2: Bush Rescue. 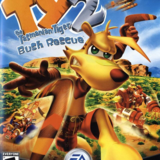