The maker of Guitar Freaks may be planning a new axe-based music game for US release.

Perhaps hoping to capitalize on some of the success of Red Octane's breakout hit Guitar Hero, publisher Konami has made a filing with the US government to trademark the moniker "Guitar Revolution"--a title that shares the nomenclature found in the company's other music and rhythm games.

The trademark, filed with the US Patent and Trademark Office on June 29, is littered with selected keywords and phrases used to describe the company's new endeavor. Among the trademark's listed descriptions are "video game controller in the form of an electronic toy guitar, sold as a unit," "stand alone electronic game machines with electronic toy guitars," and "coin-operated video games."

If Konami does release a guitar-based rhythm game, it won't be unfamiliar territory for the Japanese company. In 1999 it released the arcade and PlayStation game Guitar Freaks, often seen as the inspiration for last year's Guitar Hero on the PlayStation 2. Red Octane's Guitar Hero has since spawned a sequel and scored critical praise, industry nods, and more than 400,000 copies sold, despite a hefty $70 price tag.

Konami had not responded to a request for comment as of press time. 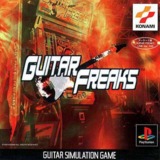