The Castlevania franchise returns to consoles in Curse of Darkness. A new hero, Hector, leads the game's cast and embarks on revenge against his former employer, who also happens to be one of legend's most vile characters, Dracula. Hector will have the help of the Innocent Devils, a group of more than 30 imps with the ability to enhance his powers.

Castlevania: Curse of Darkness is rated M for Mature and retails for $49.99 on the Xbox and PlayStation 2. For more details on the game, check back later today for GameSpot's full review.

If bloodsucking undead aren't preposterous enough for gamers, Konami offers Teenage Mutant Ninja Turtles 3: Mutant Nightmare. The game features the titular "heroes in a half-shell" made popular in comic books and Saturday morning cartoons as they slice and dice their way through Shredder's Foot Ninjas. The game supports four-player cooperative play and introduces team-based attacks and puzzle-solving. The original TMNT arcade game is also included as an unlockable bonus in the console versions.

Teenage Mutant Ninja Turtles 3: Mutant Nightmare is rated E10+ for Everyone 10 and Older for the Xbox, PS2, and GameCube versions, and E for Everyone for the DS version. All editions retail for $29.99. 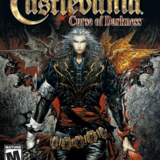