Castlevania Double Pack and Yu-Gi-Oh! GX: Duel Academy on their way to stores across the US.

Konami's having a mini-monster mash for Game Boy Advance owners this week, as the company has shipped two beastly cartridges for the system to retailers nationwide.

First up is the Castlevania Double Pack, featuring two out-of-print and hard-to-find Game Boy Advance games of the series, Castlevania: Harmony of Dissonance and Castlevania: Aria of Sorrow, compiled together on one cartridge for easy vampire hunting. Harmony of Dissonance puts players in the leathery boots of Juste Belmont as he collects relics of the original Dracula and attempts to save his friend from the dreaded one's castle. Meanwhile, Aria of Sorrow introduces Soma Cruz (who would return in the DS game Castlevania: Dawn of Sorrow), as a young man who finds himself mysteriously transported into Dracula's castle, where plans are afoot to turn him into the dark lord himself. The Castlevania Double Pack is rated T for Teen and retails for $29.99.

For tamer monster action, Konami has also shipped Yu-Gi-Oh! GX: Duel Academy, rated E for Everyone. Duel Academy brings the popular card game and cartoon show back to the Game Boy Advance, as players once again attempt to become duel masters by pitting decks full of monster cards against one another and ascending the ranks of the Duel Academy. The game comes packaged with three limited-edition Yu-Gi-Oh! cards, and retails for $29.99. 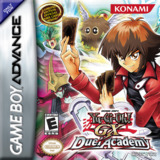