We look at the future of past games on the Nintendo DS with this newly announced arcade collection from Konami.

From courtroom adventures to cooking sims, you can find just about any type of game on the Nintendo DS by now. But surprisingly, the seemingly ubiquitous retro games compilations that have appeared on just about every platform are nowhere to be found on the DS...yet. The first classic game compilation announced for US release is Konami Classics Series: Arcade Hits, and we took a look at a couple of the titles in this collection to see how they hold up after all these years.

The Konami Classics Series: Arcade Hits compilation includes more than a dozen games from the publisher's stable of arcade titles from the 1980s. The list of games isn't final yet, but the titles that have been confirmed are Circus Charlie, a side-scrolling platformer where you have to guide the hapless Charlie through six circus events such as the tightrope walk; Contra, the classic side-scrolling shooter that has you wielding a variety of guns as you mow down enemy soldiers and aliens; Gradius, the horizontally scrolling space shooter; Roc 'N Rope, a platformer that has you climbing across ropes and avoiding enemies to reach the top of the screen; Rush'n Attack, a side-scrolling shooter where you can use knives, guns, grenades, and more to dispatch dozens of enemy soldiers; Time Pilot, a scrolling shooter that has you blasting everything from biplanes to UFOs; Track and Field, the classic sports game that lets you compete in six Olympic events by furiously mashing buttons; and Yie-Ar Kung Fu, an early one-on-one fighting game.

Of the eight confirmed games, we had a chance to see two in action. The first game we saw was Contra, the classic shooter starring Lance and Bill. In the game, you run mostly from left to right and shoot enemies and aliens through eight levels. There are two "base" levels that switch to a behind-the-back perspective, as well as one vertical level. As you make your way through the various stages, you can collect different weapons, including a flamethrower, laser gun, and the famous spread gun. We saw the first three levels of the game, and all of the enemies, backgrounds, and bosses looked good. There's also a display option that lets you turn your DS sideways to play in the game's original vertically oriented aspect ratio.

The other game we took a look at was Track and Field, a game that will put even the best button masher's finger speed to the test. You can participate in six Olympic events, such as the high jump, long jump, and 100-meter dash. The controls are simple but difficult, because they require you to alternately press one button and then another as fast as possible to make your character run. We tried our hand at the long jump and found it difficult to rapidly press the buttons while holding the DS, although placing the DS on a table to keep it still made the game a bit easier. The graphics and sound in the game look just as you might (or might not, considering the game came out more than 20 years ago) remember from the arcade.

Konami is still working on adding Wi-Fi functionality to these games, so it's not too late to hope for some wireless multiplayer action. The developer is also looking into other uses for the DS's Wi-Fi connection. One interesting feature is the ability to record your gameplay for a short period of time and then trade your saved replays with friends via the Wi-Fi connection. There's no definite word on how long of a replay you'll be able to save to the cartridge, but it will be at least a minute or so, which should be plenty of time to capture your best boss battles in Contra, fight in Yie-Ar Kung Fu, or long jumps in Track and Field.

In addition to the added Wi-Fi features, there will be some extras available in the compilation. There's an archive full of music and artwork from the games, which is a nice touch for fans who remember these games in their original context.

Konami Classics Series: Arcade Hits is due for release in March 2007 exclusively for the Nintendo DS. Until then, keep an eye on the gamespace for more information about the unannounced games and other features in this collection. 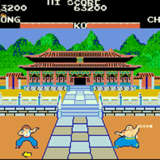