Konami plans to release a four-player sequel to its cartoon-inspired action game in October.

Konami has today announced that it plans to release Teenage Mutant Ninja Turtles 2 for all current-generation consoles as well as the PC and Game Boy Advance in October of this year. All five versions of the game will feature support for up to four players and are expected to be playable at Konami's E3 booth once the show opens.

"The incredible appeal and popularity of the Ninja Turtles transcends generations, thanks to the current relaunch of the franchise and the mass appeal of the original series," said Erica Mason, product manager at Konami Digital Entertainment America. "With Teenage Mutant Ninja Turtles 2, our team has been able to create a hugely entertaining game that re-creates the excitement of the renowned series through four-player cooperative gameplay which will excite both younger and older fans of the beloved franchise."

The PC and home console versions of the game will purportedly require much more skill to beat than the turtles' last outing and will feature both story and battle nexus modes of play. In the story mode, players will assume the roles of the turtles Leonardo, Michelangelo, Donatello, and Raphael as they battle their way through level after level of foot soldiers en route to a confrontation with their archenemy, Shredder. Each of the four turtles will boast its own distinct characteristics and abilities and will be voiced by the same voice talent responsible for them in the popular animated TV series. The battle nexus mode, on the other hand, will let you do battle with your friends head-to-head. According to Konami, the game will also feature an unlockable version of a classic Teenage Mutant Ninja Turtles arcade game, although it's not clear which one at the time of writing.

The GBA version of Teenage Mutant Ninja Turtles 2 will, unsurprisingly, be quite different from the other incarnations of the game. In addition to a 30-stage story mode, the game will boast 15 battle stages, 15 ride courses, "building-sized" bosses, and a number of special items to unlock.

We'll bring you more information on all five versions of Teenage Mutant Ninja Turtles 2 once we've had a chance to check them out at Konami's E3 booth. 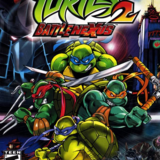