Sao Paulo FC, Corinthians, and Flamengo will sport the game's logo on their official kits.

Despite eFootball PES 2021 being dubbed a season update that will be cheaper in price, Konami is still looking to expand the soccer series going forward with several partnerships. The company announced expanded partnerships with Sao Paulo FC, Corinthians, and Flamengo this week.

Konami is now the official global partner with Sao Paulo FC and its logo will be shown on the number of its official kits as a result. This also serves as an extension to the Brazilian soccer team being exclusive to PES, which means FIFA 21 players won't be able to play as them.

Sport Club Corinthians Paulista is also upping its partnership with Konami but won't become exclusive to PES. As an official global partner, the eFootball PES logo will be placed within the numbers of Corinthians players and the club's home arena will be included in-game. The pair were previously official video game partners.

Finally, PES has extended its exclusivity deal with Flamengo. The game is now an official sponsor of the Rio de Janeiro soccer team and will appear on training kits. Like the other deals, these partnerships also apply to the mobile version of PES.

eFootball PES 2021 is set to release September 15, 2020 on PC, PlayStation 4, and Xbox One. The regular edition of the game will cost $30, while the Partner Club edition will cost $35 and nets players exclusive content for either FC Barcelona, Juventus, Manchester United, FC Bayern, or Arsenal FC. Those that pre-order through eFootball PES 2020 will get a 20% discount. 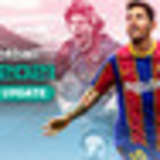