Kobe Bryant has seen his image plastered all over the place--on magazines, newspapers, and countless SportsCenter highlights. But one place he hasn't seen himself as often as an NBA superstar of his caliber should is on the cover of games.

Though Kobe is clearly one of the top NBA players of all time, his offcourt troubles sometimes overshadow his oncourt prowess. However, it appears that Sony is willing to forgive and forget his past indiscretions and plaster his photo on the cover of its upcoming basketball game.

Bryant, who will wear his new number 24 jersey on the cover, will be the spokesperson for NBA 07, Sony announced today--his first such deal since 2002. The game is being developed for the PlayStation 2 and PSP and will hit stores this fall. Bryant previously appeared on the cover of Nintendo's now-defunct NBA Courtside series.

In addition to the standard struggles of guiding a team to the NBA championship, NBA 07 offers a story-driven mode called The Life: Vol. 2, which pits gamers in the role of up-and-coming NBA stars the Kid and Big W.

The announcement marks the possibility of a huge rebound for Bryant, whose credibility took a mammoth blow in 2003 when he was accused of sexual assault by a 19-year-old in Colorado. The charges were later dropped, but Bryant admitted to the infidelity, and later made a public apology to his wife--an apology which was accompanied by a $4 million diamond-encrusted ring. Bryant has also drawn the ire of former teammate Shaquille O'Neal--the cover athlete for 2K Sports' NBA 2K7--in a war of words that has shown all the drama of a daytime soap opera.

Even with all the negative media attention, no one can doubt Bryant's skills on the court. The three-time NBA champion is a sensational scorer, and lit up the lowly Toronto Raptors for 81 points last season, second on the all-time single-game scoring list.

Kobe and NBA 07 may not just be appearing on the PS2 and PSP. A report on the deal in the Los Angeles Times claims that the game is headed to the PlayStation 3. No details on the next-gen version were disclosed, and Sony was unavailable to confirm the game as of press time.

NBA 07 is rated E for Everyone and has not yet been priced. For more information on the game, check out GameSpot's previous coverage. 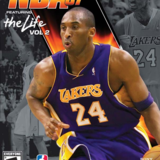