The Knockout Kings sequel is coming out not only on the PlayStation, but also on the N64.


Knockout Kings was a really solid PlayStation boxing game, and the sequel is coming out not only on the PlayStation, but also on the N64. KK2000 for the PlayStation will have more than 50 boxers, but the N64 version will have only 25. You'll still have Muhammad Ali, Sugar Ray Leonard, Oscar de la Hoya, Joe Frazier, Roy Jones Jr., and Lennox Lewis.

EA says there will be something called a flashstart option, which will let you jump into a fight very quickly, and a new great fights mode that lets you participate in classic fights. You'll also be able to create a fighter and train him. Unlike the original version, Knockout Kings 2000 will actually let you take an active part in your fighter's training. For instance, in the gym you will be able to spar and pound the heavy bag and speed bag, instead of just watching. "Next year we're going to have more of a twitch method to [the speed bag and heavy bag]," EA's Kirk Scott says. Plus you can expect new motion capture and punches in Knockout Kings 2. Also, the punches and the damage they cause should be even more accurate and true to real life, than they were in the first game.

The game is scheduled for a fall release. As we learn more, we'll post it here. 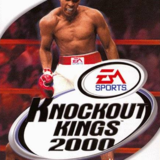