Everyone's favorite pink blob is back in this Super Nintendo remake.

The Nintendo DS is all about the remakes, and who else deserves one more than Kirby? This loveable marshmallow puff was first seen in 1992 when he didn't even have color yet. Kirby Super Star Ultra is a remake of Kirby Super Star, which was released back in 1996 on the Super Nintendo as a collection of minigames and platform games. The DS version also includes a variety of games, but we only had a chance to take a look at a few: Spring Breeze, Kirby Card Swipe, Kirby on the Draw, and Snack Tracks.

Kirby is still as cute as ever, and in Spring Breeze, we head off in search of King Dedede who has run off with all the food in Dream Land. This is a typical Kirby platformer where you jump, float, and munch on bad guys. You can eat enemies and steal their abilities, but the fun part is bringing in a friend to fight with you. It is possible to play with a friend over wireless, but if you don't want to go online, the CPU also does a great job and does most of the work for you. It's fairly easy, so those who aren't familiar with Kirby can easily pick it up and play. Spring Breeze is only one of the main modes that we got to play, but we did check out three minigames that can be played with up to three friends through DS download play.

The first one we checked out was Kirby Card Swipe, a minigame that tests your reflexes. On the touch screen, several cards will be revealed to you and the goal is to be the first one to tap the matching card that shows up on the top screen. You'll get disqualified if you tap too early, so you have to wait until the card is shown. The style of artwork in this particular minigame is worth noting because the characters take on a Japanese brush-painting look, which is a nice touch. Kirby on the Draw is a cowboy-themed fast-paced shooter where you need to take out as many targets as you can for points. You have eight rounds of ammo before you run out, but you can reload by tapping the bottom of the screen. Bombs will also appear with a skull mask, which you need to avoid because they will give you negative points.

Snack Tracks is another frantic little minigame where you sit at the bottom of a conveyer belt and try to eat as many food items as you can. The items will start scrolling down from the top screen, so you can look ahead to see what's coming next. Bombs can be tossed around, and tapping them will knock them into another lane. Bugs and rocks will also come up, but because Kirby doesn't seem to digest those very well, you need to quickly tap them to get them out of the way before they reach Kirby's mouth. Halfway through the game, the lanes will also change to keep you on your toes. Each of these minigames has three levels of difficulty, so the CPU will also provide some competition if you don't have four players. 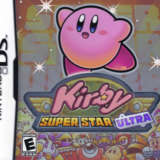