This week sees two further games available for Europeans to download from Nintendo's Wii Virtual Console service. The first, Kirby's Dream Course, is a golf title and one of four Kirby games released for the Super Nintendo Entertainment System. The game, which was originally released in 1995, features 64 colourful courses and sees the hero Kirby use himself as the ball to smash his way through the numerous enemies and obstacles on each of the courses.

The second title up for grabs this week is the 1990 TurboGrafx-16 action game Bloody Wolf (also known as Battle Rangers). Gamers play a muscle-bound special forces commando on a mission behind enemy lines after the president is kidnapped. The game consists of eight levels, called "scenes," which the commando must progress through, each with a boss battle at the end. 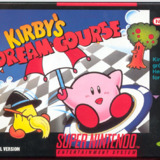