The 3D platform adventure game is coming this March--check out the newest trailer.

One of Nintendo's first big releases of 2022 is Kirby and the Forgotten Land for Nintendo Switch, and now the game has a release date and a new trailer.

Kirby and the Forgotten Land will launch on March 25, Nintendo has announced. A new trailer also has also been released that shows off some of the incredible-looking levels and Kirby's unique abilities.

Kirby and the Forgotten Land is a 3D platformer that takes players to a "mysterious world" where they inhale enemies to steal their abilities--some of the new ones include the Drill and Ranger. Players are trying to save the kidnapped Waddle Dees, and the game also supports co-op, with a second player controlling Bandana Waddle Dee.

In other Kirby-related news, Kirby 64: The Crystal Shards will be among the games available in the N64-centric expansion of the Nintendo Switch Online service. 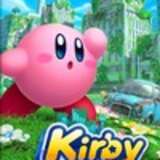 Kirby and the Forgotten Land
Follow
$59.99 on Bestbuy
Buy