By Hirohiko Niizumi, GameSpot JapanKingdom Hearts Coded (Mobile)The trailer for Kingdom Hearts Coded for mobile phones starts off with Jiminy Cricket flipping through the journal that he&#39;s written during his adventures with Sora. For some reason, all his entries have gone blank except...

Kingdom Hearts Coded (Mobile)
The trailer for Kingdom Hearts Coded for mobile phones starts off with Jiminy Cricket flipping through the journal that he's written during his adventures with Sora. For some reason, all his entries have gone blank except for two pages with short lines. One simply says "Thank Namine", and the other says "We must return them from their torment". Puzzled, Jimmy runs to consult the King (Mickey Mouse), who decides to search for answers by digitizing Jiminy's journal.

The player takes the role of a Sora that was born inside the digitized world of Jiminy's journal. Similarly to last year's trailer at Tokyo Game Show, we were shown screens that looked like the original Kingdom Hearts game. We also got to see some new gameplay including a side-scrolling action game a bit like mario, where Sora needed to jump from one platform to another and attack enemies while proceeding right. Another scene required the player to input directions, kind of like in a music game.

After the in-game scenes, the trailer turns back to Jimmy Cricket and the King, who are looking back at the journal and notice that there's a new entry that says "Their torment has been lessened". The trailer ends with an announcement that the game will be available in winter 2008.

Kingdom Hearts Mobile (Mobile)
Square Enix also showed off a trailer for "Kingdom Hearts Mobile", which is apparently an online community for mobile phone users in Japan. Slated for fall, this new online mobile service features cute Flash-animation style graphics and lets you dress up your avatar like Kingdom Hearts characters. Aside from Sora and Riku, we spotted an odd-looking Mickey Mouse and Donald Duck, so apparently you can dress up as Disney characters as well. Details on the service wasn't unveiled in the minute-long trailer, but we saw that you can play a number of games including a card battle game featuring Final Fantasy and Disney characters, and an action game where you float through trees on a balloon with Winnie the Pooh to collect items. There's also some kind of a co-op mode where you can play together with friends and earn rare goods for your avatar. 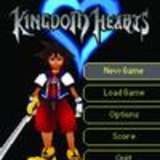