Who even still uses a PS3 anyway?

During a recent interview with longtime Kingdom Hearts developer and Kingdom Hearts 3 co-director Tai Yasue, it was revealed that Square Enix hasn't ruled out the idea of a PS4 compilation for its previous games.

"We haven't come to decision and nothing is announced yet," Yasue said. "We listen to our fans and our players and see what they think about it--and, yeah, I'm not ruling it out, but we're not making an announcement just yet."

He then added briefly that development on Kingdom Hearts 3 was in full swinging, noting that it's "moving along fine." 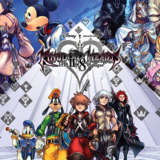