The music-based Kingdom Hearts spin-off now has a release date, and pre-orders are available.

Nintendo dropped a surprise Nintendo Direct Mini today, and led the proceedings with a fresh look at Kingdom Hearts: Melody of Memory. The Kingdom Hearts spin-off is coming November 13, according to the announcement, and pre-orders are now available.

The trailer debuted during the Nintendo Direct presentation showed off the variety of music, including hits like Let It Go from Disney's Frozen, along with a closer look at its multiplayer options. It will sport a Vs Battle to compete online for high scores, and an 8-player local Free-For-All mode.

As previously announced, Melody of Memory is also coming to PS4 and Xbox One, in addition to Nintendo Switch. It is already available for pre-purchase through the Nintendo Switch site for $60 USD.

Kingdom Hearts: Melody of Memories looks very similar to Theatrhythm Final Fantasy, which celebrated the music of Final Fantasy with a similar timing-based mechanic as characters moved along a track. Kingdom Hearts has its own orchestrated music to celebrate, as well as some of the catalog of Disney hits.

Illustrated by series director Tetsuya Nomura, we're proud to present the brand-new key art for #KingdomHearts Melody of Memory, coming to #NintendoSwitch, #PS4 and #Xbox One on November 13, 2020!

How many of the scenes behind Kairi do you recognize? 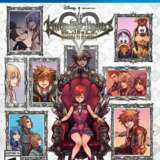