To start the new year off, SNK will unveil the upcoming King of Fighters game.

The first official reveal of the King of Fighters XV will take place on January 7, 2021 over on SNK's YouTube channel, though an exact time for when the trailer drops has yet to be announced. In the meantime, there's a short teaser the studio recently shared of some character designs for series regulars like Benimaru Nikaido and Kyo Kusanagi, as well as King of Fighters XIV newcomer Shun'ei. You can check out the concept art below.

Alongside the brief teaser trailer, King of Fighters creative director Eisuke Ogura and producer Yasayuki Oda shared some scant details about the upcoming game. Ogura announced that Shun'ei is the sole protagonist of King of Fighters XV, succeeding series mainstay Kyo Kusanagi. As such, Shun'ei will have an updated moveset and outfit to reflect his new status.

The studio will also unveil the Season 3 characters for Samurai Shodown on January 7 alongside the King of Fighters XV reveal. This includes the previously teased guest character from SNK's Neo Geo classic fighter The Last Blade, as well as a brand-new one. 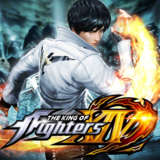 The King of Fighters XIV
Follow
$37.91 on Walmart
Buy