Two months after Killzone 2 made its long-awaited debut on the PlayStation 3, Sony and Guerrilla Games have released the critically acclaimed sci-fi shooter's first downloadable map pack. Titled Steel & Titanium, the add-on has been added to the PlayStation Network today for $5.99 and contains two...

Two months after Killzone 2 made its long-awaited debut on the PlayStation 3, Sony and Guerrilla Games have released the critically acclaimed sci-fi shooter's first downloadable map pack. Titled Steel & Titanium, the add-on has been added to the PlayStation Network today for $5.99 and contains two new maps. The first is set aboard the ISA tech cruiser New Sun, while the second has gamers straddling two high-speed Helghast freight trains. 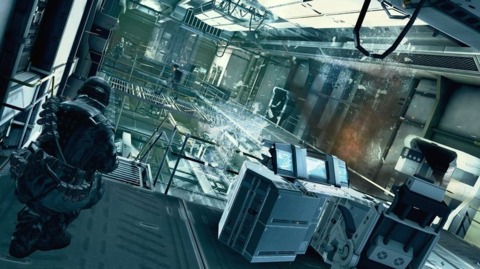 Following the not-so-surprising announcement of Marvel vs. Capcom 2 earlier this week, a demo for the madcap fighter is now available on the PSN. The sample includes six characters (Ryu, Chun-Li, Strider, Spider-Man, Iron Man, and Wolverine), seven backgrounds, and options to play local multiplayer matches.

The Killzone 2 map pack and the MVC2 demo are joined by a host of other DLC for a number of PS3 titles this week. EA and Criterion have released the Burnout Paradise Cops and Robbers pack for $9.99, and the Little Big Planet Egyptian Mini Pack is available for $2.99. Disgaea 3 has three new character packs available: the Action Prinny and Mid-Boss packs are running at $1.99, while the Dragon character costs 99 cents.

As revealed by EA earlier today, Need for Speed Undercover picked up two packs today. The Challenge Series add-on is free of charge and adds new modes, cars, and events, while the Boss Car Bundle includes eight rides for $4.99.

Guitar Hero World Tour and Rock Band both received an allotment of new playable tunes this week. Activision's rhythm game has been updated with a trio of tunes from Nirvana: "Sappy," "Stay Away," and "Very Ape." As previously revealed, the long-awaited Jane's Addiction album Nothing's Shocking is rocking MTV Games and Harmonix's rhythm title.

On the PSP store, a Patapon 2 demo is now available in advance of the game's May 5 launch. PSP gamers can also pick up the Prinny: Can I Really Be the Hero? Li'l Asagi Comes Home add-on pack, which updates the side-scrolling beat-'em-up with a new stage and boss character. The Prinny pack is available for $3.99.