We finally get the sequel fans have been asking for: Does it fly or fall?

Has it really been 24 years since the original Kid Icarus hit the NES in the US? If you know that the answer to that question is "yes," then you've probably been chomping at the bit for more information on the upcoming Kid Icarus: Uprising for the Nintendo 3DS. We had a chance to get some time in with the anticipated sequel for Nintendo's upcoming system at its New York press event and are happy to say that it's definitely headed in the right direction.

Who's Making It: Nintendo's own Project Sora Studio, which, fans may remember, was founded by Nintendo president Satoru Iwata and former HAL Laboratories wunderkind Masahiro Sakurai.

What It Looks Like: As seen in the game's E3 trailer, the game features the visual overhaul that main character Pit and the goddess Palutena received in Super Smash Bros. Brawl. The world and enemies also share the same cartoony aesthetic, which we like.

How It Uses 3D: Given that the game has been designed to be a 3DS game, Kid Icarus: Uprising definitely highlights the hardware's capabilities. The flying and ground sections throw a lot at the screen for you to react to. The flying sequences offer the most dramatic showcase for the 3D visuals, but the ground combat sequences offer a broader range of 3D moments due to the different attacks used by the various enemies you'll face off against.

What You Do: The demo on display featured two "abridged" chapters from the upcoming game that offered two different difficulty levels. Chapter 1 (The Second Coming of Palutena) was the easy choice in the menu, while Chapter 4 (The Reaper's Line of Sight) offered the hard choice. Both levels featured the same basic level structure in that they started with an on-rails flying sequence that runs you through a set path in the sky. The flying segments segued into a ground combat section that lets you move freely and explore a modest-sized area on your way to face off against a boss. Chapter 1 offered an expectedly mellow run in the skies, which set up the game's conflict with Medusa and included tips from Palutena on how to play. This section culminated in a boss fight against Twinbellows, a fiery Cerberus-esque canine. Chapter 4 featured a much more challenging run through the skies that required a hefty amount of multitasking. You'll have to dodge obstacles in a canyon run, face tougher enemies on the ground, and go up against a massive Reaper boss that forces you to maneuver Pit between two floors to avoid being squashed.

How It Plays: The controls in the game made sense, although they could still use some refinement. You'll move Pit with the 3DS's analog nub. When you're in the air, this lets you dodge incoming enemy attacks or avoid obstacles by moving up and down or left and right. We were happy to see an onscreen icon on the touch screen that lets you switch between normal and inverted controls on the fly. When you're on the ground, you can move Pit around in the open areas. You'll attack in both flight and ground sections using the left trigger.

The demo let us choose from three weapons that featured unique attributes. The blades were the most balanced of the three, having no specific weakness. The claws offered greater attack speed but a shorter reach. Finally, the orbitars fired two powerful shots that grew in power after being released. There appeared to be two types of attacks that could be performed in the demo, each with a more powerful secondary option. Pit appears to automatically switch between melee and ranged based on the proximity of the enemy in your targeting reticle. You'll be able to perform a more powerful secondary charged attack that requires you to line up your shot and hold on firing to build up power. In addition, it appears that you'll automatically use attack items, like a grenade we picked up, with the next attack you perform after collecting them. Finally, you'll use the stylus and touch screen to move Pit's targeting reticle over enemies in flight. While this is also how targeting works on the ground, you'll also be able to rotate the camera around you by flicking right or left on the touch screen. The degree of rotation is based on how vigorous your flick is, letting you rotate in small increments or broader 180-degree chunks.

What We Say: Overall, we have to say we like how the game feels. The level structure keeps things moving along at a good pace, and there's definitely fun to be had. The controls feel almost right but need some refining (especially in the ground sequences where you need to control the camera with the stylus) to keep the experience smooth. We're also hoping the tongue-in-cheek tone of the demo--which had had Pit, Palutena, and Medusa bantering back and forth--actually makes it into the game. While there's not a specific date for Kid Icarus: Uprising's release outside of "2011," we'll be keeping a close eye on this one thanks to the positive impression it made on us. Though it still has some elements to refine, we really can't deny its appeal. Look for more on the game soon. 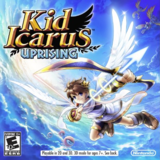