Katamari Damacy sequel coming to US

Namco confirms that the Prince of All Cosmos will return to PlayStation 2s stateside, with new co-op mode; First screens inside.

One of the biggest surprises of last year was Katamari Damacy, the quirky debris-gathering game from Namco. Given the game's popularity with audiences and reviewers, it came as next-to-no-shock when the publisher announced it was developing a sequel. Called "Minna Daisuki Katamari Damacy," which translates to "Everyone's Favorite Katamari Damacy," the game was set for a spring 2005 release in Japan but was then delayed until July 7.

But while the sequel was a lock across the Pacific, North American Katamari Damaniacs were unsure if the game would ever roll onto US shores. That changed today when Namco announced the game would be released stateside before the end of the year. The company also revealed the game's English title--We Love Katamari--and it revealed that, like its forebear, the game would be PlayStation 2-exclusive. No specific release date was given.

Like Katamari Damacy, We Love Katamari will follow the diminutive Prince of All Cosmos as he completes a series of missions for his father, the King of All Cosmos. Once again, these missions will have the prince striving to assemble large "Katamari," or clumps of debris. To grow their Katamari the appropriate size, players must roll them around so any object in their paths will stick to their snowballing masses.

At first, the Katamari will only be able to absorb small objects. However, when they reach the appropriate size, they will be able to absorb much larger objects, up to and including buildings. We Love Katamari will have a whole new range of items for players to add to their Katamari, including everything from fish to world landmarks, like the Eiffel Tower. It will also feature a range of new settings both on and off of Earth, including urban, underwater, and mountainous locales.

One all-new feature of We Love Katamari will be a two-player co-op mode. Each player will control part of the same Katamari, and the two will have to coordinate their movements to keep the ball rolling in the right directon. The game will also sport an expanded version of the first game's battle mode, which will have "three size scopes for competitive rolling action," according to Namco.

GameSpot will have more on We Love Katamari as further details are released. For a complete rundown on the first Katamari Damacy, read the full review. 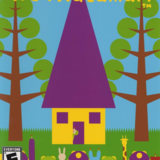