We get a chance to show off our lovely singing voices at E3 2004.

The Bemani series of rhythm games had a nice presence at Konami's booth this year, including a small disco room where Karaoke Revolution Volume 2 was on display. We grabbed the mic and scrolled through the song list, and once the PS2-powered applause died down, we got a good feel for this sing-along sequel.

The visual presentation looked similar to the original Karaoke Revolution, including cartoon-proportioned, cel-shaded singers and a variety of locations. We noticed that the new singers you could karaoke as seemed a little more "out there" than the returning roster, and they included a steely female robot and a beer-gutted redneck. The action seemed pretty similar as well, challenging you to sing along with a wide variety of pop hits. A minor in-game touch that we saw during the demo was real-time volume adjustment, which let you use the PS2 controller to change the volume of the mic, the music, or the original vocals on the fly. Being able to lean on the karaoke rendition vocals came in real handy for "Every Breath You Take." One thing we noticed about the actual instrumentation is that although they’re not done by the original artists, the music seems much more accurate than what we heard in the original Karaoke Revolution.

Senior producer Mike McHale gave us an impromptu demonstration of Volume 2's medley mode, which lets you either handpick three to five different songs or it chooses the songs randomly for you. It then plays one-minute, back-to-back clips from either the handpicked or the random songs. The transitions seemed pretty seamless, and it required us to really be ready to change styles quickly. We were told that the game wouldn’t play the exact same one-minute clip every time, which should help give this mode some extra legs.

Upon stepping out of Konami's private singing booth, we could see that Karaoke Revolution Volume 2 is shaping up to be a sequel that will give fans a slightly more polished experience than its predecessor. The game currently has a July 13th release date, and you can expect a more in-depth look at the game before it ships. 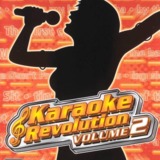