Konami takes the wraps off its latest entry in the popular party rhythm series.

We got to take a quick look at Karaoke Revolution Party, the newest entry in Konami's caterwauling party game series, at a press event today. Previous Karaoke Revolution games have been pretty darn straightforward: You sing into a microphone along to the words on the screen, while the game grades the accuracy of your pitch and the onscreen crowd reacts to your performance. Developer Harmonix has made some improvements here and there since the series began to keep things interesting, but it looks like Party will easily have the biggest run of new content to keep you budding songsters entertained.

For one thing, Party's song list is the biggest ever for the series, with more than 50 tracks available. But beyond that, the big news is the new Sing & Dance mode, which lets you combine the traditional Karaoke Revolution gameplay with a Dance Dance Revolution dance mat to get a little soft shoe in while you ham it up on the mic. You'll have to keep up with the pitch of the song and also hit all the right dance steps, because your final score will be tallied based on your performance in both areas. Naturally, not all songs will be included in the Sing & Dance mode, since certain songs lend themselves much more readily to dancing than others.

Revolution Party will also feature extensive character customization options. As per the norm, you'll be able to change your hair and clothing to suit your taste. Better yet, the game will have support for EyeToy Cameo, which is a Sony-designed system that lets you take pictures of your face from varying angles with the EyeToy and then save your facial data onto a memory card. Party can then import your face into the game and map it right onto your character, which can look surprisingly accurate, from what we saw demonstrated.

Finally, the game will contain a number of new minigames, some of which sound downright bizarre. One is a beach volleyball game that was referred to as a sort of "vocal Pong." In this mode, you'll change the pitch of your voice up and down to move your paddle and bounce the ball back at your opponent. Another mode, called Yo! Dude! Rock!, has you and another player trying to help a bunch of little dudes and dudettes successfully stage-dive into a crowd. Each person that comes out is marked with one of the three words in the title, and the word tells you not only what to say but also what pitch to use when you say it. If you hit the right pitch and timing, you'll get your little person onto the crowd and score points. The people start coming really fast as you get into the round, resulting in a hilarious cacophony of "yos" and "dudes" and "rocks" that we couldn't help laughing at.

It's nice to see Konami and Harmonix putting so much effort into spicing up the gameplay in Karaoke Revolution, since they could just keep iterating the franchise with a new song list every year and still sell a respectable number of copies. And as an added bonus, Revolution Party will come with a DDR demo packed in, so you can experience more of the dance craze that's sweeping the nation if you're so inclined. We'll bring you more on Karaoke Revolution Party as it happens. 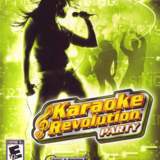