Sega had its upcoming GameCube monster-making game Kaijuu no Shima: Amazing Island on display at its booth at Tokyo Game Show 2003. Amazing Island lets you create a monster, and then play a library of mini-games with it. The game seems to have a pretty lenient learning curve, but it could potentially offer hours of entertainment.

You begins the game by selecting a boy or a girl character to act as your monster's trainer. You are then accosted by a helper who works at the monster-making laboratory. This character asks you a series of multiple-choice questions that appear to act as a sort of personality test. For instance, you'll be asked: "The time between your wristwatch and the wall's clock is different. What's the difference?"

After receiving the answers to your questions, the laboratory helper will automatically create a body base for your monster. You can then customize the shape of your monster's body by using a pen tool controlled by the analog stick, and you can also fatten or slim down certain parts of the body using a number of menu options. Once the base is complete, you can then attach body parts such as eyes and tails, followed by accessories like eyeglasses and buckets. Some of the available parts are seem extremely odd, like the buckteeth of a seal, while others may look familiar, like the bulging eyes of Sega's own Sonic the Hedgehog.

Once you've created your monster, you can then go outside of the laboratory and talk to townspeople to play mini-games such as throwing balls into a hoop, or hopping on the surface of some water to travel as far as possible. Though these two mini-games were available at Tokyo Game Show, the final game will have many more. By getting high scores in the mini-games, you can unlock additional body parts for use with your current monster, or to build new ones.

Amazing Island is seems to be intended for audiences of all ages. The game's graphics and characters include "super-deformed" characters reminiscent of Nintendo's Animal Crossing. And like Animal Crossing, the new game will let you download your data from your GameCube to a Game Boy Advance, which you can then bring over to a friend's house to play with there. The game will let up to four players play simultaneously and compete against each other in various mini-games. Kaijuu no Shima: Amazing Island is scheduled for release this winter in Japan at a price of 6,980 Yen. 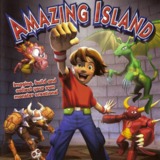