"Fight choreographed chess brought to life as a video game."

Thomas Was Alone and Volume developer Mike Bithell has announced his studio Bithell Games' next game, and it's a "fast-paced, action-oriented" strategy game based on the John Wick movie series. John Wick Hex is coming to unspecified consoles as well as PC; it'll be exclusive to the Epic Games Store on PC and Mac at launch.

John Wick Hex is described as "fight-choreographed chess brought to life as a video game." The game, which was developed in cooperation with the minds behind the film series, aims to "captur[e] the series' signature gun-fu style while expanding its story universe."

Here is more from the game's official description: "Players must choose every action and attack they make, while considering their immediate cost and consequences. Every move in John Wick Hex feels like a scene from the movies, and every fight contributes to your progress on the job and requires precise strategic thinking."

Hex features an original story separate from the film series. As players progress they will unlock more weapons, as well as new suits for John Wick and more locations to explore. Regarding the gunplay, a press release mentions that players will need to strategically consider the weapon they use for the specific battle in front of them. Not only that, "ammo is finite and realistically simulated, so time your reloads and make the most of weapons you scavenge on the job," the developers say.

Regarding the art style, Hex aims to offer a "unique graphic noir art design." The game also features the voices of John Wick actors Ian McShane and Lance Reddick; more cast members will be announced later. It's unclear if Keanu Reeves, who plays Wick in the movies, will be involved.

Check out the Hex announcement trailer embedded above to see the first gameplay and more. No release date was announced.

The announcement of Hex comes just days before the third John Wick movie, John Wick Chapter 3: Parabellum, comes to theatres on May 15. This is not the first John Wick game, as a VR game--John Wick Chronicles--was released last year. It also doesn't mark the only expansion of the universe, as we know a John Wick TV series is in the works, with Reeves onboard as executive producer. 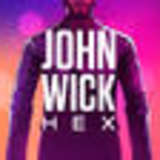