The initial sell-through numbers for the Nintendo GameCube are in.

Nintendo has sold through approximately 60-70 percent of its initial shipment of GameCube consoles in Japan, according to a Nikkei report. The publication reports that the company has unofficially sold between 280,000 and 300,000 units of the initial shipment of approximately 450,000 units--originally slated to be 500,000 units--in the three days since the console's launch. Additional units of the GameCube console will be shipped to retailers in Japan shortly. The Nintendo GameCube launched on September 14 in Japan with three games: Luigi's Mansion and Wave Race: Blue Storm from Nintendo and Super Monkey Ball from Sega. Nintendo has not released specific sales figures for the software at this time.

By most accounts, the launch of the Japanese GameCube was relatively low-key, when compared with previous video game platform releases. Following the launch of Nintendo's Game Boy Advance, the company announced that sales of the handheld had exceeded 650,000 units in a single day. Sony's PlayStation 2 sold more than 900,000 units, including both traditional retail and online sales, in Japan in its first weekend of availability. By March 2002, the end of the company's current fiscal year, Nintendo hopes to sell 4 million units of the GameCube and 10 million software units worldwide. The North American launch of the console, slated for November 18, and the upcoming release of high-profile games such as Star Wars Rogue Leader: Rogue Squadron II and Super Smash Bros. Melee should greatly aid the company in reaching those goals. 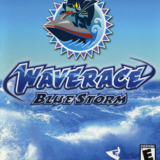