TOKYO--With the 2006 FIFA World Cup Germany just months away, Microsoft is looking to capitalize on World Cup fever as the Xbox and Xbox 360 have been named the official game consoles of the international tournament. In Japan, where soccer has always been popular, the company is collaborating with FIFA, Adidas, and Electronic Arts to release a limited edition Xbox 360 bundle themed around the World Cup.

The bundle will feature the console, several accessories, and a copy of the Electronic Arts game. The console will also be tricked out with an Adidas Japan Blue faceplate featuring the colors of Japan's national soccer squad. The bundle will be limited to a shipment of 10,000 units. It will be open priced, meaning that it doesn't have a MSRP, but some online retailers are selling the package for around $430.

The items to be bundled in the Xbox 360 Blue Limited Edition: 2006 FIFA World Cup package goes as below. 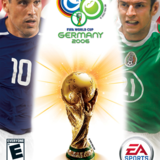