20th Anniversary Edition will have new art, re-orchestrated music, and behind-the-scenes bonuses; coming to PC, Mac, iPad, and Android in 2014

Gabriel Knight creator Jane Jensen is remaking Gabriel Knight: Sins of the Fathers for PC, Mac, iPad, and Android, it was announced today. The original game was released in December 1993.

Jensen's Pinkerton Road LLC has licensed the Gabriel Knight IP from Activision Publishing to create the new game, which will be released in 2014. Details about the licensing arrangement were not provided.

Gabriel Knight: Sins of the Father 20th Anniversary Edition is being built from scratch and will feature new art, re-orchestrated music, and behind-the-scenes bonuses. It will be presented with 2048x1536 3D graphics, replacing the original's 640x480 pixel art. The game will be developed by Phoenix Online studios.

"I'm thrilled to be back at work on Gabriel Knight and to bring this classic game to a new generation of players," Jensen said in a statement. "It's a designer's dream to be able to enhance the game and bring in more New Orleans flavor than technical limitations allowed us to in 1993. It's going to look and feel like a brand new title. But never fear, 100 percent of the original Gabriel Knight: Sins of the Fathers is here. I hope both existing fans and new players will love it."

Pinkerton Road and Phoenix Online Studios have been working on Gabriel Knight: Sins of the Fathers 20th Anniversary Edition for about a year now. The studio is also working on a new adventure game called Moebius, set for release later this year. 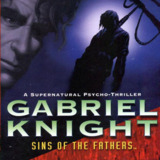