"I have no idea if there are enough people that still care about James Pond after all these years," says original creator Chris Sorrell.

The '90s platforming character James Pond will be attempting a comeback via Kickstarter, series creator Chris Sorrell has announced.

A Kickstarter campaign for the aquatic agent will commence on September 20.

"I have no idea if there are enough people that still care about James Pond after all these years," said Sorrell. "If you do, and if you can help us to fund this thing, then for my part i'd be very happy to do anything I can to help create a brand new game."

"But maybe this time we'd skip the chocolate biscuits," he added, referencing the product placement of McVitie's Penguin biscuits in the UK version of James Pond 2: Codename RoboCod in 1991.

The original James Pond launched in 1990, and was successful enough to spawn two sequels, with James Pond 2 having been ported to many other platforms over the years. An iOS game, James Pond in the Deathly Shallows, was launched in 2011 to poor reviews. 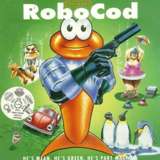