James Pond is back

Swing! Entertainment will revive the classic platform hero for the GBA and console platforms.

German publisher Swing! Entertainment has announced that it plans to revive the classic game James Pond - Codename Robocod on the Nintendo Game Boy Advance. Originally released on the Sega Genesis and SNES, the game features a debonair tadpole in fast-paced platforming action. The new Game Boy Advance version will have updated graphics that will make use of the efficient GBA hardware.

"This is a proud moment for us--the world is crying out for a new hero, and we were delighted that Mr. Pond agreed to take up the challenge," quipped Marco Huesges, president and member of the board of Swing! Entertainment Media AG. "We are sure that he will not disappoint his fans, who have eagerly awaited his return."

James Pond - Codename Robocod is being developed for the GBA by Creature Labs. The game will be released in late 2002 for the handheld. In 2003, Swing! Entertainment will also release new console games, starring James Pond, on multiple platforms. 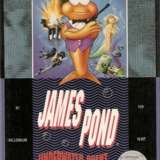