We get our first look at bitComposer's graphical overhaul of Jagged Alliance 2 at the 2011 Game Developers Conference.

The 2011 Game Developers Conference in San Francisco is winding down, but there are still plenty of new and exciting games being shown, including Jagged Alliance: Back in Action, a graphical overhaul of the cult-classic 1999 turn-based strategy game in development at German studio bitComposer. Back in Action will essentially be a 3D face-lift that renders all characters and battlefields in full 3D but that otherwise seeks to faithfully re-create Jagged Alliance 2. The story is still the same--you're still a mercenary captain contracted to liberate the oppressed (and fictional) island nation of Arulco, and you still use the services of the Association of International Mercenaries to hire soldiers of fortune for your cause. The version of the game we saw was very early along and was lacking many features, including some of the early game's interfaces, but we were assured that the final game will, in fact, have the original game's Web-browser-on-a-laptop-computer interface for both your starting character's personality test and the in-game AIM website. However, it sounds like bitComposer may be planning to rerecord the audio dialogue for its mercenaries--if so, hopefully the developer can recapture the personality and humor imparted by Jagged Alliance 2's original creator, Sir-Tech, way back when.

Just like with the original Jagged Alliance 2, the meat and potatoes of Back in Action will be tactical battles that take place in Arulco's oppressed villages and military bases, eventually culminating in climactic battles in the compound of the evil Queen Deidranna herself. And just like before, the game will give you the choice to play these battles in real time (if you happen to be totally insane) or in turn-based mode (if you're sane).

From what we can tell from our brief demonstration, Back in Action brings back all the elements of the classic tactical strategy game, including limited action points for each mercenary to spend each turn on movement, reloading, firing, throwing grenades, using explosives, patching up wounded teammates, and so on. If you happen to be carrying an automatic weapon, you can also still set your firing mode to single shot, burst, and full auto. Back in Action also uses Jagged Alliance 2's line-of-sight system, which displays each character's field of view as a triangular cone on the ground radiating outward, and just like in the original game, your best bet, at least early on, will be to stay low, stay out of sight, and pick off enemies one by one.

The early version of the game we saw was still using placeholder in-game assets, but the 3D environments are a definite step up from the original game's classic but sadly dated 2D forests and burned-out shacks. If nothing else, the game's 3D foliage and environmental features seem to make it considerably easier to tell when you or your enemies are behind cover--an occasionally problematic issue with Jagged Alliance 2's pixelated 2D environments. Everything else seems to check out so far. Back in Action will take the outstanding tactical strategy of Jagged Alliance 2 and refresh it with much-cleaner-looking graphics. The game will ship later this year. 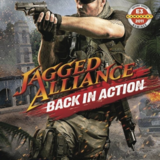 Jagged Alliance: Back in Action
Follow
$9.75 on Walmart
Buy