Dragon Quest and Super Mario characters meet face-to-face in the next installment of Square Enix's hit board game series.

MAKUHARI--When Itadaki Street was first announced for the Nintendo DS, it seemed simply like fate that the game would feature a crossover between Square Enix and Nintendo characters. During the Square Enix Party 2007, we had the chance to get our hands on the game to see how well the two sides mixed together. Itadaki Street DS features an all-star cast of characters from the Dragon Quest and Super Mario series (unfortunately for Final Fantasy fans, no characters this time). The sample we played featured 20 character slots on the select screen, with only eight of them unlocked. The roster of characters included Slime (DQ series), Pudding (DQ2's princess), Cristo (DQ4), Young Yangus (DQ8 spin-off), Mario, Princess Toadstool, Yoshi, and Toad. The Itadaki Street booth at Square Enix Party 2007 had a number of character cutouts pasted around the walls that hinted at some of the unlockable characters in the game, like Jessica (DQ8), Angelo (DQ8), Bianca (DQ5), Aleena (DQ4), Dragonlord (DQ), Wario, Luigi, and Donkey Kong.

Unlike in the previous Itadaki Street installment on the PlayStation 2, you'll be playing as an original character (a girl or a boy), going against the Dragon Quest and Super Mario characters. While you won't be able to play as one of the characters, you can collect various costumes to look identical to them. There's a huge lineup of costumes, such as a Yoshi costume, a Dr. Mario costume, a Luigi costume, Wario's moustache, Jessica's hair, a hammer (apparently from the Hammer Brothers), a torchlight, and a Cypress stick (both from the Dragon Quest series), to name just a few. There are also original costumes, like a maid outfit and a head ornament shaped like a Bobomb.

As for gameplay, if you've ever played Itadaki Street Special on the PlayStation 2, you'll recognize how this game plays and looks. You roll dice, hop through squares, and purchase the stores that you land on, and you collect money whenever another player stops there--it's very much like Monopoly. It's a traditional-style board game, except on the DS it plays with two screens. The upper screen is used for playing, while the bottom screen displays the stage map and character statistics. There seem to be a total of 14 maps/stages that are based on the DQ and Mario series. We've seen four unlocked maps, which were based on DQ8's Trodain Castle, DQ3's ghost ship, Mario Circuit, and Yoshi Island.

Finally, given that it's a board game, Itadaki Street doesn't push the DS hardware much with its graphics, but the characters and backgrounds we saw were well drawn, in full 3D, and moved smoothly. Overall, the game looked and played solidly, and it seems ready for its shipment to stores in Japan in just two months. 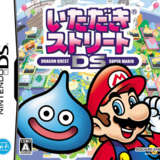