It Takes Two Passes 5 Million Copies Sold, Is Hazelight's Most Successful Game Ever

It Takes Two continues to sell and has now become Hazelight's biggest game of all time.

"Our team is absolutely stunned just thinking about how many players have now enjoyed our game!" the developer wrote on Twitter in celebration of the news.

5… that’s FIVE million copies of #ItTakesTwo  sold! 😳💥🥳
Our team is absolutely stunned just thinking about how many players have now enjoyed our game! 😍

With sales of 5 million units, It Takes Two is Hazelight's most successful game of all time, surpassing 2018's A Way Out, which sold more than 3.5 million copies. It Takes Two is exclusively a co-op game, so presumably many more than 5 million people have actually played the game.

One of GameSpot's favorite split-screen co-op games, our It Takes Two review scored the game a 9/10. "Takes Two is the best 3D platformer I've played since Super Mario Odyssey, and like that game, it has a flair for variety," reviewer Andrew King said.

Hazelight and director Josef Fares have not announced their next game, but it'll be one to watch given how successful It Takes Two, A Way Out, and Brothers have been.

The announcement of 5 million sales for It Takes Two comes not long after news broke that a TV or film adaptation of It Takes Two was in development. 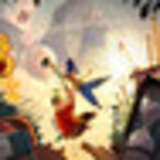