When playing iRacing, I&#39;m reminded of a lyric from one of my favorite Rush songs, "One Little Victory":The measure of the momentIn a difference of degreeJust one little victoryStarting out with this demanding PC racing sim, you take the victories where you can get them, even if they aren&#39;t... 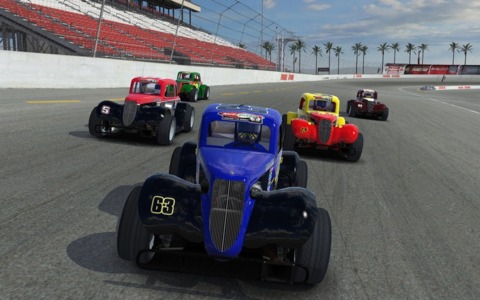 When playing iRacing, I'm reminded of a lyric from one of my favorite Rush songs, "One Little Victory":

Starting out with this demanding PC racing sim, you take the victories where you can get them, even if they aren't victories at all. The sim--brought to life by cofounders John Henry (owner of the Boston Red Sox) and Dave Kaemmer (the long-time racing sim developer behind such classics as Grand Prix Legends and the NASCAR Racing series)--opened in August of last year to public use. Since then, it has amassed an impressive reputation and an even more impressive list of high-profile players, including such NASCAR stars as Dale Earnhardt Jr. and A. J. Allmendinger, as well as 1997 Formula One champion and 1995 Indianapolis 500 winner Jacques Villeneuve.

Last week, the iRacing folks dropped by GameSpot HQ to give us a taste of the sim. I'd been aware of the game ever since its announcement--and wrote about it a few weeks back after the company announced a deal with NASCAR--but hadn't yet had a chance to try it for myself. And while speaking with Kaemmer about the game gave me some interesting insight into the technology behind the sim--particularly the laser-scanned tracks that minutely record and re-create every nook and cranny of such tracks as Laguna Seca, Road America, and Lime Rock Park--only cockpit time can give you the real story behind the game.

Really, the term "game" doesn't fully apply to the PC-only iRacing. To hear Kaemmer explain it, iRacing is part service--he's got more than one story of race pros using the sim to find better lines around tracks found in the game--and part up-and-coming legitimate sport. In fact, there are plans in the works for tech that would allow spectators to watch high-profile series races as if they were tuning into their favorite racing series on a Sunday afternoon.

Still, lofty ambitions don't take away from the fun of iRacing's gameplay, which, for sim racing fans especially, is considerable. Being in the car, whether you're on a white-knuckle ride in a fully sanctioned race event or simply Sunday driving in your favorite car on your favorite track, is a joy. The game's challenging physics, which punish mistakes with cruel regularity, can be a constant source of frustration (or elation, when you really nail a lap). When you couple that with some of the most skilled--and carefully polite (few, if any, first-corner pileups)--race fields I've ever seen in a driving game, you've got a platform that is as ideal for learning how to race as it is for showing off your skill against the competition.

The reason for all of that skill--and those meticulously mannered first corners--is simple: iRacing takes online racing seriously. When you first fire up the game, you're given a rookie license. While you're allowed to drive any car and any track available to you in Practice mode regardless of license, in the early goings, you'll only compete in a handful of events that are available to you. As you compete in race events, your license score will change depending on your performance. Driving well will improve your license score; driving poorly will lower it. Improving your score enough will eventually upgrade your license and give you access to new series in which to compete.

The delineation between "good" and "bad" driving is strictly defined by the game. You don't necessarily need to win a race to be a success--at least in the early goings. Simply driving clean, avoiding accidents, and staying on track is enough to reward you with a good performance once the checkered flag is flown. Considering the game's challenging driving model, which demands consistency above speed, the level of concentration you need to maintain in a race is demanding. You need that concentration, for example, to avoid a sure-fire collision or yank control of your car back from the brink of disaster. When you add to that the necessity of conserving your car's engine and tires in races that regularly last about a half-hour or more and the fact that one misplaced tire or misjudged turn can result in a blown race, each little victory you earn on the track will be one worth relishing. 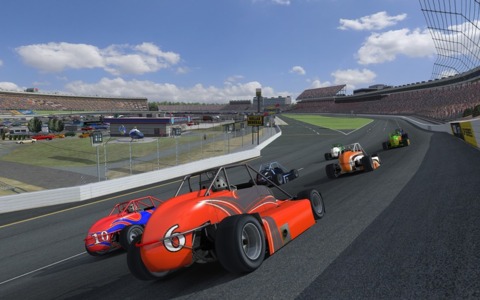 There's plenty to like about iRacing's serious approach to racing. But all of that attention to detail and hyper-realized focus comes at a price: namely a subscription fee that runs anywhere from about $19 for a monthly recurring subscription to $156 for an annual subscription (which breaks down to $13/month). All basic subscription packages have the following content included:

Downloading new cars (such as open-wheeled cars like the Skip Barber Formula 2000 or the Star Mazda or stock cars like the Chevrolet Impala SS Monte Carlo) will cost you as will downloading new tracks from iRacing's ever-growing list. A typical download (be it a car or track) runs anywhere from $15 and up, though iRacing does offer discounts for bulk downloads, as well as iRacing credits, which can be earned in game and used to purchase content. With the amount of content currently available for download, and with more on the way in the coming months, you can easily spend several hundred dollars in iRacing. Add in the required PC racing wheel--preferably a force feedback model that can accurately convey the bumps and imperfections of the tracks--and you're talking about a pretty significant investment to get your iRacing career started.

While it's tough to argue with iRacing's on-track quality, its subscription cost and unflinching challenge can certainly be considered an obstacle for those new to racing. That said, when played as something to learn from as much as something to be enjoyed, iRacing has a lot to offer. As with racing in the real world, driving in iRacing is all about enjoying the victories as they come--be they great or small.

We'll have more on iRacing in the coming months. Until then, check out the game's Web site for more information. 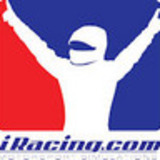