Interview With a Made Man E3 2004 Updated Impressions

Acclaim gives us a look at its upcoming organized-crime-based action game for the PS2 and Xbox.

During our time at Acclaim's E3 2004 display, we had the chance to experience a brief demo level of Interview With a Made Man, the company's entry into the world of crime-based action games. In the game, you will play as Joey Varolla, a relative newbie to the world of the mafia, who, over time, rises up through the ranks of the family to become a made man. The build we were shown of the game was a pre-alpha build, but it still gave us a good look at what kind of gameplay mechanics will be featured in the game.

The level started out with Joey standing outside a gas station on a desolate desert highway. Suddenly, ski-masked thugs began pouring out of a nearby van and started shooting up the joint. Armed with only a handgun, we began gunning down every crook that came our way. The game's targeting system seems to be a mixture of manual aiming and autotargeting, in that you can easily turn away and target another enemy just by tilting the aim control. The game will also feature a unique "pre-targeting" system that you can enact by going into a bullet-time-like mode. While in this state, you will be able to use a targeting reticle to lock onto multiple enemies, and then once you're back to normal speed, you'll be able to simply cycle through your views of said enemies using a split-screen view. The split-screen view will also come in handy in other situations, as it will often pop up to show you when new enemies are arriving on the scene and similar types of things.

Another mechanic we got to see was a move the developers have titled "jump to cover." It's a form of a dodge move, but when you perform the move near an object or wall that you can use for cover, you will automatically jump behind it and find yourself in a covered state. Cover is a big part of the game's action, and you will need to find it regularly to avoid having to take a permanent nap.

Though very little of the game's environmental physics and none of its final dialogue were in the demo build, we did get little snippets of both. Objects like barrels, bottles, and other things you'd expect to be destructible will be and will also feature fully realistic physics rather than scripted movement or destruction. The game's dialogue seems to be rife with Sopranos- and Goodfellas-styled swearing, with more than a few f-bombs being dropped all over the place.

Interview With a Made Man will be released on the Xbox and PlayStation 2 sometime next year. We'll have more on the game as it becomes available. 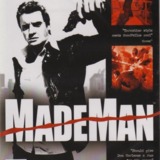 View Comments (2)
Made Man: Confessions of the Family Blood