Intellivision Lives! on the GameCube

Compilation of 60-plus classic Intellivision games from the 1980s will be making its way to the GameCube this fall.

Intellivision Lives!, the game pack that consists of more than 60 games from the Intellivision home console, will be released on the GameCube this fall. Realtime Associates, founded by the console's original developers, will port the games to Nintendo's console. Intellivision Lives! will retail for $19.99 and will be rated "E" for Everyone.

The compilation plops players into a re-creation of a 1980s pizza parlor, where they can choose from more than 60 simulated arcade cabinets, each housing an Intellivision classic. The list of games includes Astrosmash, Night Stalker, Shark! Shark!, and Baseball. Intellivision Lives! also features some never-before-released games, interviews with the original developers, new game modes, and TV commercials for the console from the early 1980s.

Intellivision Lives! was released earlier this year for the Xbox and PlayStation 2 in its current form, while a more comprehensive PC version was released in 1999. 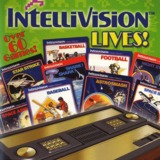