Insurmountable, The Roguelike About Climbing A Deadly Mountain, Releases On April 29

The adventure roguelike Insurmountable now has a release date: April 29. While you have to wait a bit longer to pick up the game, you can add it to your Wishlist on Steam right now.

The game will release that day for PC through Steam at a price point of $18/ €18/£18, which is lower than normal. The price will go up to $20/€20/£20 from May 6. A console edition for PlayStation 4 and 5, as well as Xbox One and Xbox Series X|S will come later. Additionally, developer ByteRockers' Games said in a release that a Switch edition is "being considered."

What's Insurmountable all about? The indie game challenges players to face the difficulty of climbing a mountain. "Players must manage limited resources, find the optimal route, and face dangers to reach the top of the mountain," reads a line from its description.

If players are killed by the elements, they must begin their journey back at the start, in traditional roguelike fashion. Here's a trailer to help you get an idea for what the game is all about.

This Insurmountable mode "does not forgive the slightest mistake." But no matter what mode you're playing on, "a wrong decision can trigger a chain reaction that means the end of the respective run and a return to the first mountain."

Insurmountable also has procedurally generated mountains, while there is a dynamic weather system, a day-night cycle, and different types of terrain to increase the challenge.

Players can be killed in numerous different and horrific ways, including lack of oxygen and energy, cratering mental health, and freezing winds. Also, the wildlife can kill you.

"In Insurmountable players must strategically think through each option to ensure their survival, find loot necessary for advancement, and ultimately conquer the mountain. The text-based events present players with real consequences; there are no second chances," says the description.

Players can choose from three distinct characters, each with a specific set of skills and abilities, as they set out on each journey up the mountain. There is also a Scoreboard system that tracks successful runs; players can use this to compete with friends for the highest scores. 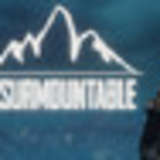