Specialty retailer gives us a tour of their $7 million, 182,000 square foot facility in Grapevine, Texas and explains what goes into its refurbishment process.

For the first time ever, GameStop opened its refurbishment center in Grapevine, Texas last week to outside eyes and ears. GameSpot was invited to Texas to get a tour of the facility and to speak with those who run the operation about what exactly goes on in there. We seized the opportunity, and flew to Texas to do just that. 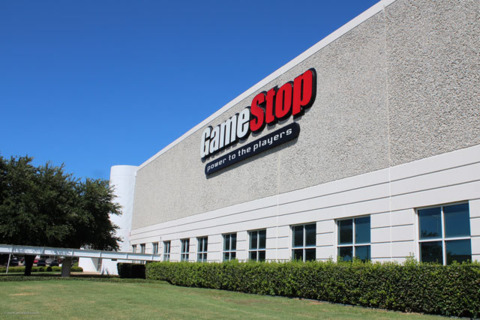 During our time at the center, officially called the Refurbishment Operations Center, ("The ROC" as its employees call it), we got a one-on-one tour of the facility, spoke with executives like GameStop CEO Paul Raines, and learned quite a lot. Below and on the next page you'll find a gallery of photos from the center, some of which we took, and some provided by GameStop.

The ROC is a 182,000 square foot facility that opened in 2010, and is located at 2200 William D. Tate Avenue in Grapevine, Texas, just down the road from GameStop's headquarters. And by "just down the road," we mean just 2.3 miles away. The prior refurbishment center was located at GameStop's HQ, directly on top of corporate offices.

The ROC was a $7 million investment, and an expense proposition that made Raines and the rest of the executive team "very nervous." Ultimately, GameStop purchased the facility, and Raines says it affords the company an "unrivaled competitive advantage." In an interview with GameSpot, Raines explained that having a refurbishment center like the one it operates has allowed GameStop to have great success in the pre-owned market where others have tried and failed. 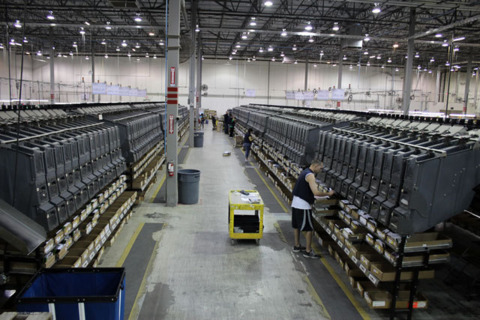 All discs that come to the ROC are sorted using these machines.

When you trade in a game, console, or peripheral at your local GameStop location, and the sales associate has doubts about the quality of the disc or device, the item is packaged and sent to the center. GameStop charges you a "refurb fee" for this.

Once at the center, the refurbishment process begins. But first, what does refurbishment exactly mean? Or what does it mean to GameStop? According to divisional vice president of refurbishment John Daugherty, "We're looking at repairing it; getting it back to that original factory condition. Not upgrading it, not downgrading it, but getting it back to where it is…you're not just trying to get it working, you're not trying to sell it to a customer and in 30 days or 60 days they have a bad experience with it, because they'll never come back to you again."

Who Works at the ROC?

Games and consoles (and now tablets and iDevices, too) are sorted, cleaned, prepared, and even destroyed at the ROC. To do this, GameStop employs 1,100 associates (divided into two shifts) to get the job done. GameStop says many of the employees are local job recruits who come from varied national origins, including South and Central America, Southeast Asia, and West Africa. 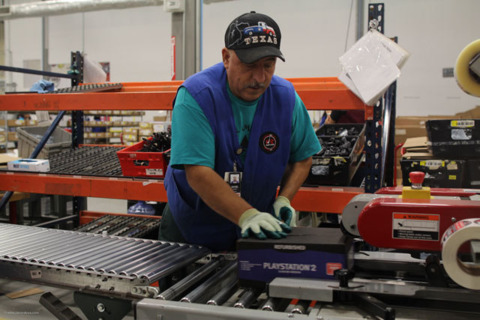 A worker is shown here preparing a refurbished PS2 to head back to retail.

Daugherty said GameStop has never stopped hiring for positions at the ROC, with both hourly and salaried positions always available despite the economic downturn hurting the United States workforce.

Quality Assurance is a Big Operation

GameStop stressed it emphasizes quality in the used products it sends out its doors. Of the 1,100 staffers at the center, 85 are dedicated exclusively to quality assurance. GameStop's senior vice president of supply chain and refurbishment Bruce Kelp reiterated this fact again and again, saying GameStop "can't lessen quality" with its refurbishment process. To this end, a quality inspection is conducted at every stage of the refurbishment process. If a disc passes through GameStop's cleaning devices and processes and cannot be salvaged, it is sent to die at the sharp teeth of a low-tech disc-destroying machine. For perspective, more than 17 million discs came through the ROC in 2011, and 3.5 percent (or 595,000) were destroyed. Check out the image on the next page to get an idea about what the disc-destroyer is capable of. 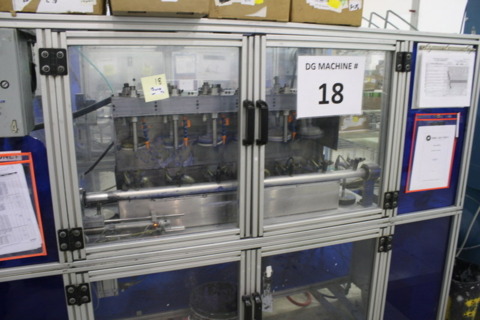 Not every console that comes to the ROC makes it out intact, either. Kelp told us that 15 percent of consoles that come through the center are either dismantled for parts or destroyed. Karp was also clear that destroyed discs and devices are not simply tossed in the trash. They are recycled en masse: in 2011, the refurbishment center recycled more than three million pounds of electronic waste.

In addition to working to ensure that discs and devices that leave the center meet quality standards, GameStop stressed that it makes as sure it can that devices (like consoles, tablets, and iPods) are free of personal data like credit card information or log-in credentials.

"We encourage the consumer to erase. We really think that's the best option. If they forget, and sometimes they do, then we have a deep process that guarantees that," Daugherty said. I'm not going into details, because it's somewhat proprietary, but I can go all the way to the depth of over-writing multiple times, hex-coding code…so we can go to quite a bit of depth to guarantee that personal content can't be retrieved."

It's Not All Refurbishment at the ROC

The ROC is not only used to refurbish used products, it is also a manufacturing center and an idea-incubator. GameStop's new $40 wireless Bluetooth controller for Android games is built at the center. Kelp told us that when GameStop's attempt to find a manufacturing partner for the controller fell through, the company decided to build the devices in-house. Many of the parts come from overseas, but the manufacturing of the controllers is done by a team of assemblers in the facility, at a rate of 300-400 per day. Additionally, GameStop is using the ROC to cook up new ideas. The ROC's research and development division hosts the design of a number of projects, including refurbished PlayStation 3s pre-upgraded with a 1 TB hard drive, and a number of ideas still "behind the curtains." 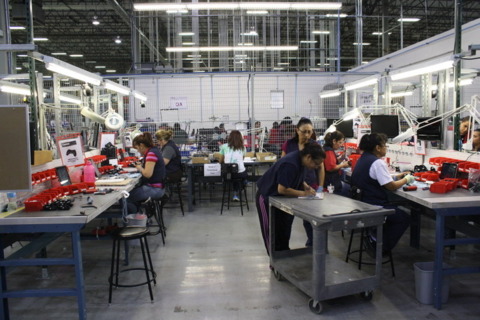 Why Not Move the Operation to Mexico?

Grapevine, Texas and Mexico are just 500 miles apart. Would GameStop consider moving its refurbishment center to that country, where it could take advantage of lower labor costs? According to Daugherty, GameStop won't do this, because it doesn't need to.

"The bad news is we're competing against the rest of the world, and the rest of the world has lower labor rates," he said. "Here's the good news: we can beat them…because of process control. I've worked at lots of factories and I know how hard it is to provide the controls that we provide here," he said. "It does have a cost to us, which is kind of the behind the scenes thing that the consumer never gets to see. They see what we offer in trade and they see what we sell it for. They don't see the process behind the scenes. If they were more aware of that, they would [say], 'It makes more sense to me now. It makes more sense to me why the prices are what they are.'"

What Happens When Industry Goes Digital?

GameStop's refurbishment center is principally focused on physical products, so when the industry transitions to digital, and such a change is certainly happening, will the center be shut down, and all its employees sent packing? According to Daugherty, GameStop will adapt to survive.

"We have always been aware that digital is coming; it was no secret. It was years and years ago when we said 'This is where the future is coming.' So how do we embrace that? How do we evolve our business into that? How do we say to our consumers 'Whatever way you want to achieve your gaming needs, however you want to make it happen, we're there to facilitate that.' So on my side, if discs fade out, then iDevices come in," he said. "Consumer electronics are not going to go away. So we're always going to be positioning ourselves to meet whatever way consumers are trying to achieve their gaming needs, digital or otherwise, we're going to be a facilitator for that. I think we have that knowledge base because of the years we've built up already, to be able to do that better than anybody else." 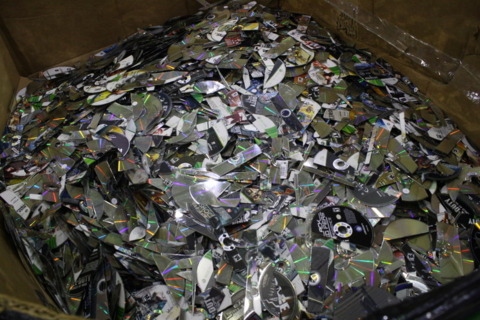 Where discs go to die. What games do you recognize? 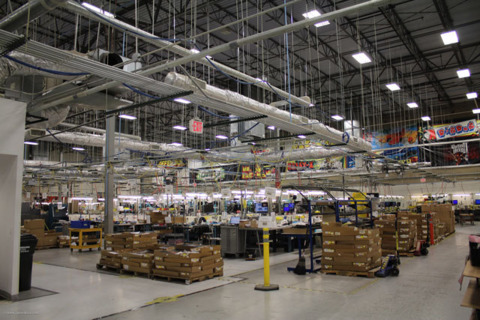 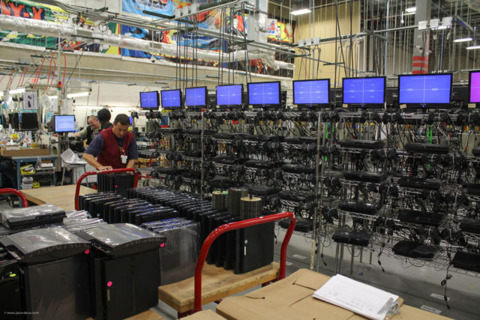 Consoles, like these PS3s, are kept running for hundreds of hours to test longevity. 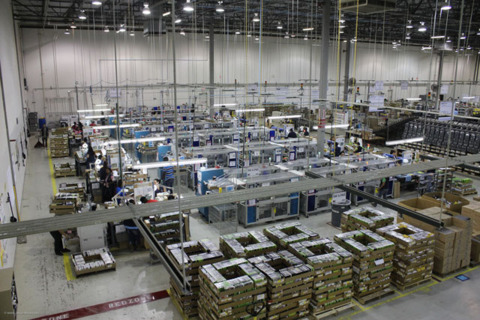 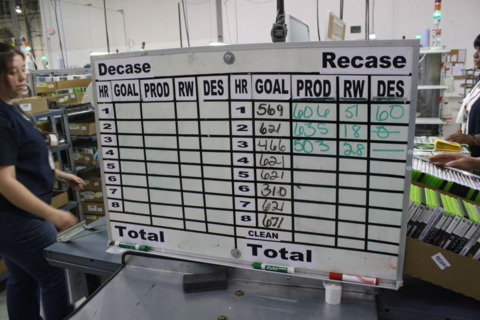 Workers are given goals for hourly input. On this day, workers exceeded expectations through hour three. 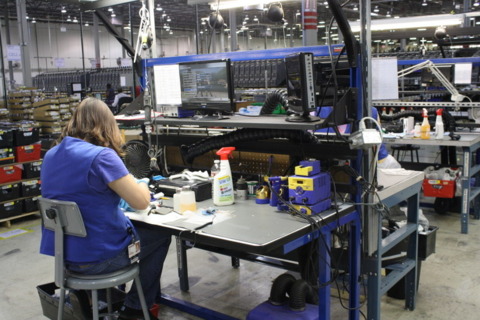 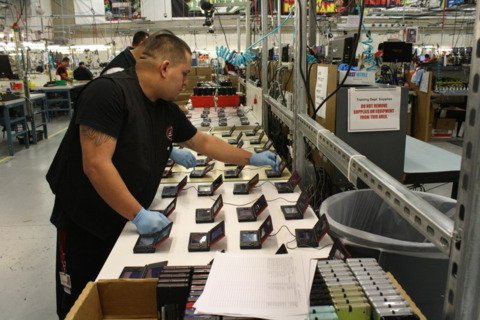 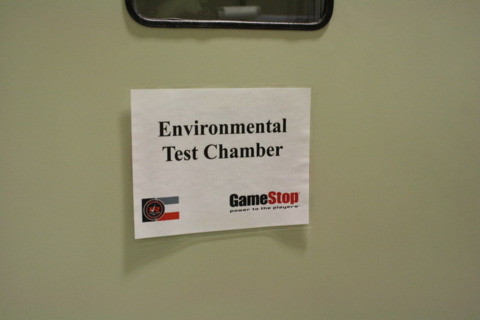 GameStop puts its refurbished consoles through this chamber which simulates natural conditions like excessive heat and cold.