Take an inside look at Planet Moon's infectious portable shooter in our exclusive in-depth look at the upcoming Infected.

There's no doubt that the PSP is one impressive piece of hardware. Sony hit all the high notes in designing its first portable system, which is inarguably the most advanced handheld game machine to date. Yet all that power is sitting idle, as stellar releases for the PSP have been few since the system's launch back in March. Heck, all the releases have been few, because Sony and its third parties aren't exactly lighting up the PSP's release schedule. And much of what's coming has been done before. So what's a PSP devotee yearning for some variety to do?

Enter Planet Moon Studios, the quirky developer of such idiosyncratic games as Armed & Dangerous and Giants: Citizen Kabuto. The San Francisco-based team is now hard at work on its first PSP-exclusive action game, Infected, and what we've seen of its gory, tongue-in-cheek shooting so far promises quite an original and entertaining experience for PSP owners who just can't play one more round of Lumines. Infected drops you in the middle of one very chaotic Christmas season in New York City, when one of those pesky killer viruses has broken out and zombified much of the metropolitan population. Don't you hate it when that happens?

You'll play the role of a police officer named Stevens, who's pitching in to help fight the hordes of ravenous walking undead. As luck would have it, Stevens' blood happens to contain an antibody that has a violently adverse reaction when it comes into contact with the virus. Some smarty-pants scientists have rigged up a blood gun that will let Stevens fire rounds containing small amounts of his own blood at the monstrous former citizens of New York, destroying each one, in turn, in a shower of body parts and miscellaneous fluids. Of course, you'll have an ever-expanding arsenal of conventional weaponry to fall back on, too.

Aside from the last name, there's really not much to know about Officer Stevens. That's because you'll have to create him (or her) for yourself when you start up a new game. You can pick a first name for your character and then choose from 16 different template body types, each of which has different clothing, hair and skin colors, and other features that can be tweaked. In all, Planet Moon says there will be about 2 million possible characters, so it's a safe bet you won't see anyone else using the same Stevens you are.

At its core, Infected plays like your typical third-person shooter. You'll roam the city streets, looking for the infected so you can smear them all over the pavement. You'll have a target-lock-on system that makes the gameplay pretty point-and-shoot, and you can also dash or use a 180 turnaround move for more-agile maneuvering. The process of purging a zombie is simple: Unload into it with your regular weapons--which include a pistol, a shotgun, a submachine gun, rocket-propelled grenades, and even the affectionately named BMFG--until it's susceptible to being splattered by your blood bullets. Once the enemy's health is low enough, one well-placed shot will splatter it all over the sidewalk. And the best part is, any nearby enemies caught in the spray will also be taken out, which means you'll be able to set up some gnarly combos in the more crowded areas.

But wait, there's more! Each level will have a real urgency to it, because at the outset, there are only a few infected citizens roaming the streets. But the longer you wait, the more innocent bystanders will be transformed into the slavering undead. So it certainly behooves you to get off your keister and get to slaying. The ratio of people to zombies is represented by a little meter at the top of the screen. If too many humans are infected, the mission will go into "viral overload," causing the entire level to be flooded with enemies that will actively come after you, making you work a hell of a lot harder to stay alive. So, obviously, you won't want to stand around twiddling your thumbs too much while the virus runs amok among the hapless populace.

Thankfully, Officer Stevens will continue to grow and become more powerful as you frag your way from Brooklyn to Staten Island. You'll start off with just a basic pistol and the blood gun, but the more zombies you kill--and the more points you accumulate, in turn--the better weapons you'll get access to. Weapon upgrades will happen automatically, so as soon as you hit the point marker for a shotgun...boom! You have a shotgun. But you'll always be able to switch down to previous weapons as the situation dictates. There will also be some tasty special weapons available, from several kinds of grenades to every zombie killer's best friend, the chain saw. You'll get these special weapons by setting up particularly bloody and complicated kill combos. Finally, you'll be able to increase your health and speed as you proceed through the game, which will carry over into the game's other modes as well.

Planet Moon is still hammering out the specific length of the game, but there will purportedly be at least 50 missions for you to blast your way through. The missions will vary in complexity, but from what we saw, they'll all have some fairly strategic underpinnings. As a result, this won't be just a completely mindless blastfest. Each mission's map splits the level area into a number of "cells," and blue and yellow dots represent humans and zombies, respectively.

When the zombies start to take over a particular cell, it'll start to flash red, letting you know that it's becoming a danger zone. Conversely, if you make a directed effort to cleanse a particular cell entirely of infected, no more enemies will be able to occupy it, which obviously sets up some tactical possibilities for creating choke points and so on. We'll be interested to see the complexity of later missions in the game, to see just how creative you can get with your strategy.

So what happens when you've played through those dozens of missions and have saved New York? Time to start splattering your friends. Infected will ship with a number of four-player competitive modes that are built on the core single-player game. There's your basic deathmatch and team deathmatch, of course, as well as two more interesting modes: savior and mad cow. Savior challenges you to rescue innocent civilians and fight off the undead faster than your opponent can. Mad cow places a bovine power-up somewhere on the map, and the player who manages to find it first will literally become a mad cow, complete with enhanced powers and scoring potential. Kill the mad cow, and, of course, you'll become the mad cow.

Planet Moon's tagline for Infected is "infect the world with your PSP," and really, that's as apt a description as any of the game's unique viral multiplayer component. Whenever you play a multiplayer match, the winner of that match will transfer his or her own unique version of Stevens to the loser's game, like a virus. This will infect three of the loser's single-player missions, making the enemies in that mission all take on the appearance of the winner's custom character. What's worse is that any health, speed, or weapon upgrades that player possessed when he or she beat you will carry over to those enemies, making them a whole lot tougher to defeat.

Once you're infected by another player's virus, you've got a couple of options. One, you can try to play through those three missions, and if you can beat them all, you'll clear the infection. Two, you can challenge other players to a new multiplayer game, and if you win, they'll catch the virus from you, rendering you cured. Needless to say, if enough people engage in unprotected multiplayer matches, your viral character could spread very far indeed. One of the niftiest features of Infected is that the final game will contain a world map that will literally show you all the players on Earth that currently possess your unique virus.

Speaking of nifty, Planet Moon is working to imbue the game with its trademark brand of humor by putting you up against a zombified Santa Claus and scores of other bizarre enemies. Infected is pushing the PSP pretty hard, too. Purportedly, the engine can render up to 15 character onscreen at once, and the environments we got to see were pretty large. From the different missions we played, you'll generally always be in an urban environment, though with so many missions available, there ought to be plenty of variety in the locales.

Based on our early look, Infected is shaping up to be one of the most original games yet for the admittedly barren PSP. We've seen the basic framework so far, but we'll be interested in checking out the later missions, which should contain wilder weaponry and crazier monsters. What's more, Planet Moon and Majesco have some additional announcements up their collective sleeve regarding the game's soundtrack, as well as other such goodies that will be made as the game's near-Halloween release date approaches. Stay tuned for more on Infected in the coming months. 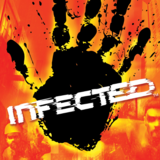