As twilight sets upon New Marais, Cole finds himself trapped in a supernatural thriller of his best friend's creation. Get all the details here.

"Zeke…uh…I got bitten by a vampire." Infamous 2: Festival of Blood has a ridiculous premise; that much is certain. One night Cole gets attacked by a vampire and is transformed into a blood-sucker himself. You'd think someone just made this up off the top of his head. And you'd be right. The entire tale is a concoction of Cole's closest friend, Zeke Dunbar, in a desperate attempt to woo a damsel he meets in a bar. It takes place outside of the main storyline and is its own self-contained supernatural spoof. Alongside Sucker Punch animation director Billy Harper, we got to check out some highlights for this downloadable adventure, including new powers and enemies.

It's a warm autumn night, and the city of New Marais is dressed up for Pyre Night. This celebration centers on warding off demons and other evil spirits through song, dance, and copious fireworks. Of course, when an electrified Nosferatu takes to the streets, no amount of pomp and circumstance will keep him at bay. "This is a purely evil experience," explained Harper, as he made Cole drain yet another civilian. Both Cole and the player are at the whim of Zeke's comic-book-fueled imagination.

Being a vampire does have its advantages. At the top of that list is flight, which is a feature that the team at Sucker Punch has been dying to implement. Cole takes to the skies and transforms into a swarm of bats as the camera swoops into a first-person perspective. He can then flutter to the tops of buildings or quickly close the gap on one of the new enemy types--the Harpy--that likes to hang out in high places. Another new power is vampire vision, which lets Cole spot enemy vampires disguised as humans, as well as secret doors and passageways throughout the city.

These hostile night stalkers aren't the glittery kind either. They're massive half-man/half-bat monstrosities that can zip across the battlefield quickly and rip Cole to ribbons if you're not careful. They can also bite and infect other civilians, transforming them into gray-skinned ghouls to be set upon you. Once Cole has beaten one of these firstborn vampires into submission, he can use his modified amp--now with a wooden stake at the tip--to finish the monster once and for all.

With the expanded user-generated content tools, you can even create your own vampire love triangle. "We noticed that people really liked creating narrative-based missions, but there wasn't a system in place to support that," said Harper. To correct this, the team has added tools for players to create their own 2D cutscenes. These tools include a set of 2D portraits of the cast, compete with customizable expressions and text bubbles for you to edit. The background image can by taken from anywhere and at any angle in the gameworld.

Before settling on vampires, Harper said, the team considered all options. In the end, the team wanted a strong, Halloween-themed monster, and the vampire "made the most sense." He also noted that if the player were to fly through the downloadable content following only the story-based missions, it would last between two and three hours. However, there will be plenty of new upgrades and collectables to unlock on the way as well. This content will also be compatible with the PlayStation Move update coming to all Infamous 2 owners as a free update. Infamous 2: Festival of Blood will be available for download on the PlayStation Network on October 25. 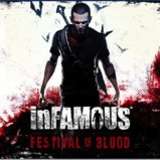