Take a look at the map from the Indiana Jones 4-Movie Collection.

All of the Indiana Jones movies have finally arrived on 4K UHD. Packaged together as a collection, the recently released Indiana Jones 4-Movie Collection contains a map featuring behind the scenes photos and points of interest where Indy traveled during his adventures.

One of the many iconic things from the Indiana Jones franchise are the transitional scenes where the protagonist is traveling to a new location. The films showed a plane flying over a map as Indy and company reached the next destination. This is showcased on the map contained in the collection, which separates Indy's travels by movie and gives fans a timeline of when the movies took place. Check it out for yourself below.

The flip side of this map are the four posters from the Indiana Jones movies, which were drawn by legendary artist Drew Struzan. He's the artist behind the iconic posters for Back to the Future, Bladerunner, Big Trouble in Little China, and many others.

The Indiana Jones 4-Movie Collection is out now. Currently, it's available on Amazon for $83, and the original price is $91. This is the first time that these movies have been collected and released in 4K UHD. Each film has been remastered from 4K scans of the original negatives. All of the picture work was approved by Steven Spielberg. There are plenty of special features included in this collection as well. 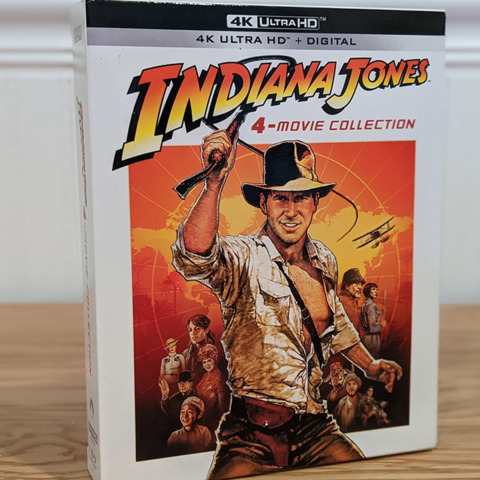 There are seven hours of previously-released bonus material, which all appeared in previous home releases for these films. There are five "Making of" features--two for Raiders of the Lost Ark, one of which is a documentary from 1981. There are also plenty of behind-the-scenes features, three of which are in HD--as they're for Kingdom of the Crystal Skull.

Of course, if you're looking to watch these movies, and don't want to pick up this collection, all four Indiana Jones movies--along with Season 1 of The Young Indiana Jones Chronicles--are available to stream on Paramount+.

Speaking of Indiana Jones, the fifth movie in the franchise is in production, and the first image of Harrison Ford as Indy on the set has leaked. The film has a interesting cast so far, with Mads Mikkelsen, and Phoebe Waller-Bridge joining Ford. Additionally, there were reports of Boyd Holbrook and Shaunette Renée also joining Indiana Jones 5. James Mangold will direct the fifth Indy movie, and it is expected to hit theaters on July 29, 2022.