We take a look at the debut game from developer Tilted Mill and discover why it will offer a fresh approach to the city-building strategy genre.

With the recent shuttering of the Impressions development studio by Vivendi Universal Games, it would appear that the long line of ancient city-building strategy games has come to a close. Impressions, after all, had developed all the Caesar and Pharaoh games, going back all the way to 1993. But a few years ago, a number of ex-Impressions employees formed their own development house, Tilted Mill, with the mission of approaching the genre with a blank slate. The result of their effort is Immortal Cities: Children of the Nile, which, as the title suggests, should be the opening chapter in a new line of strategy games.

It would be a mistake to think of Children of the Nile as a 3D version of Impressions' Pharaoh. The developers at Tilted Mill spent a year just contemplating the design of the game, taking into account what worked and what didn't in city-building games. What they decided was that they wanted to make a game about people and not about abstract systems, so the entire game is based on the idea of households. Each household contains a family, and these families have wants and needs. It's your job as pharaoh to provide an environment that allows them to fulfill their desires and keeps them fed and safe. In return, their happiness rating will improve, and your prestige level will increase, which plays an important role in making sure your dynasty moves forward.

Children of the Nile takes the approach that if you build it, they will come. In other words, you have to convince the villagers in the game that it's in their best interest to live under your rule. The Egyptians in the game will start off as hunter-gatherers, living in scattered villages with little semblance of society. With the establishment of agriculture, you'll see the beginnings of civilization. Farmers will work hard to produce food, and they'll want certain goods in return for their surplus. This leads to the rise of craftsmen, who turn raw materials into goods. This in turn will lead to the rise of the class system, as middle and upper classes will emerge, and so on.

However, to get to a thriving city, you have to provide the support structures and opportunities to let civilization flourish. You'll need to build temples for priests who serve certain functions, including educating the young and tending to the sick. You'll also need scribes, required to assess taxes on the nobles and collect tariffs on trade. Overseers are needed to manage public-works projects, such as the building of irrigation canals, temples, and pyramids. And generals command your militia, policing your city and responding to armed raids. In addition to providing public servants, you'll also have to worry about establishing trade routes and supply lines to allow the import of exotic resources that can be turned into luxury items, which will spur your citizens to work even harder to afford them.

Children of the Nile eschews the paranormal element found in the later Impressions city-building games; you won't have gods literally walking around your city. But religion still plays a critical role in many ways. One of your citizens' concerns will be their status in the afterlife, so it'll be important to have plenty of temples and shrines to allow them to worship any number of the Egyptian gods. And when they die, you'll actually see the surviving family members hold a funeral procession, and they'll carry the body to the mortuary for embalming before delivering it to a tomb, if you've provided those buildings. If not, then expect some unhappiness from that direction.

The game will cover the three major periods of ancient Egyptian history: the old kingdom, the middle kingdom, and the new kingdom. One of the concepts in the game is that your pharaoh is part of a dynastic family, and he'll eventually die. Now, if your pharaoh has managed to amass a large amount of prestige (by building temples and pyramids or by achieving goals on the strategic map), your dynasty will continue. But if your pharaoh is the kind of ruler who doesn't bother to distinguish himself, and his prestige level is low when he dies, then the dynasty is in trouble. So it'll be important for you to constantly look to improve your society and boost your prestige by building grander and grander buildings and monuments.

One thing that Tilted Mill really wanted to get at was the idea of visual feedback; instead of relying on charts and tables to figure out the state of your city, all you have to do is examine what the people are doing. Citizens don't just walk around randomly as background color; each of them is going about specific tasks. So one thing you'll be able to do in Children of the Nile is follow your citizens as they live their lives. They'll wake up in their homes and go out to work in the fields, or gather raw materials, or work at a craftsman's shop, and then return home. If you see one get mugged, you know you've got a crime problem. If they're begging in the streets, then you've got a labor issue, and so on. If too many problems build up, then your popularity rating will fall, and there's a chance that a catastrophic event, like raiders striking your city, will trigger a revolt and you'll lose the game.

Children of the Nile will feature full 3D graphics, courtesy of the Empire Earth engine, which Tilted Mill licensed from Stainless Steel Studios. The engine lets you zoom and rotate the map, and in addition to being able to view the game from the traditional top-down, isometric point of view, you can zoom all the way to the ground and walk around the streets, as if from a first-person perspective. It's possible to even go inside some of the buildings. The game will pack plenty of other little details, like monkeys running around (wealthy elites can import monkeys to live in their gardens) and other wildlife, including crocodiles and hippos. You may even see citizens throwing rocks at the crocs to keep them away. Right now, the minimum system requirements are shaping up to be an 800MHz CPU with a GeForce-level video card.

The game will ship with the main campaign and a number of scenarios (Tilted Mill has a dozen veteran scenario developers working on the game). Like most city-building games, it'll be single-player only, but it will ship with editing tools, which will allow you to design your own scenarios. The game will also include a context-sensitive help system with plenty of details, because the developers feel that gamers like to have that kind of documentation in strategy games. Children of the Nile looks like it'll be an impressive entry into the city-building strategy game genre; Tilted Mill has been working on the game for nearly three years, and there are lots of fresh ideas and personality in the game. Immortal Cities: Children of the Nile should soon go into beta, and it's due out in the fourth quarter of the year. 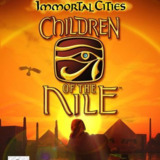 Immortal Cities: Children of the Nile
Follow
$15.00 on Walmart
Buy